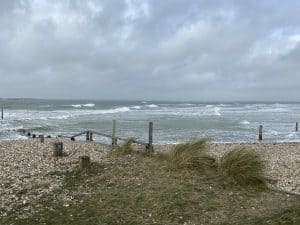 The definition of the word ‘fetch’ is simple:

The distance that wind travels over open water.

But why do we need to know that?

Spend enough time on or near the sea and the reason becomes apparent.

The strength of the wind.

The length of time it has been blowing.

The distance of open water it has been blowing over: the fetch.

If any of these three variables increases then the size of waves will also increase. The reason that understanding fetch is so valuable is that the first two are intuitive and feel logical, if not obvious. Fifty foot waves after a Force 11 violent storm would not surprise anyone. Equally, a gusty force 6 breeze that has not relented for days on end would lead to expectations of choppy seas for most.

But a change in something less obvious and often invisible – the fetch – can have as big an impact as either of these factors. You cannot get big waves in a small pond, however hard or long the wind blows. But you can get very big waves if a modest wind blows over water uninterrupted for hundreds of miles.

From the book, ‘How to Read Water‘:

“One of the biggest differences between beginner sailors and more experienced ones is that early on it is easy to read too much into the forecasted wind alone. If the Met Office forecast a Force 5, a new sailor might think, I’ve been out in a 6 before and it wasn’t all that bad, so this will be fine. A wiser sailor will think, where’s this 5 coming from?”

Although fetch is of most concern to those bobbing about on the open ocean, it can be understood, observed and enjoyed by those who never set foot on a boat.

Look at the image below of shallow water on a beach. 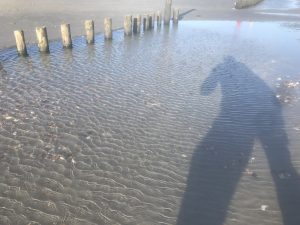 The breeze is coming towards.

If you look closely you’ll be able to see how there are no ripples at the far edge and how they grow steadily bigger as we look closer to us.

Now imagine that you are an ant on a tiny twig of a vessel, bouncing around on these ripples. You are a conscientious ant and checked the forecast before embarking and it promised steady light winds. And yet suddenly the importance of fetch becomes apparent.

The wind has not strengthened, the time it has been blowing has not changed, but still you’d be very keen indeed to get to the far end of this water, where the fetch is minimal.

Have a look at the following photo. Now use your understanding of fetch to work out which way the wind is blowing. Answer below the photo. 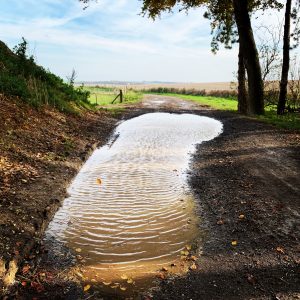 Again the wind is blowing towards us and the ‘waves’ grow much bigger towards the near end.

These tiny differences over a puddle are magnified when the wind blows over the ocean.

The photos below were taken within 1 minute of each other. They show the same sea on either side of a shingle bank. In the top photo we are looking into a strong wind and it has blown over many miles of ocean.

In the bottom picture, the wind is just as strong, but the waves are tiny. That is the massive difference that ‘fetch’ makes. 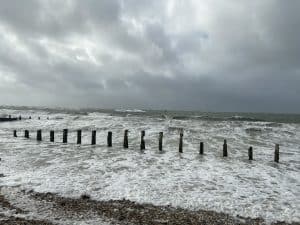 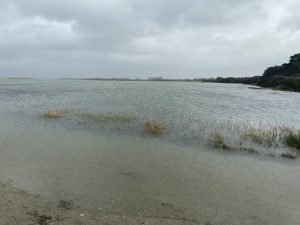 The videos below show the same beach water at the same time. First looking downwind, second looking into wind:

The Difference Between Waves and Swell

How to Read Wave Patterns at the Coast