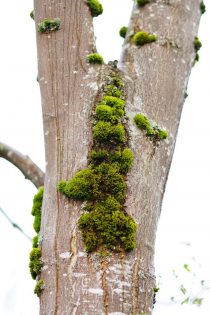 Moss is probably the best known natural navigation indicator in the world. It is also excellent at demonstrating how easy it is to go wrong if you take unnecessary shortcuts.

For many decades natural navigation has been treated as a skill that is only likely to be used in an emergency. Consequently it has too often been written about and taught as a series of ‘quick tricks’. There are two problems with this approach:

If you learn the trick that moss grows on the north side of trees, rocks and buildings then it may help you sometimes, but it will hinder you on an equal number of occasions. If, however, you learn that moss does not care about north or south, but thrives on moist surfaces, then your chances of finding direction accurately shoot up. Moss needs moisture to reproduce.

The best technique is a two-step process. First you need to find some moss, next it is important to ask why that surface is moist. There are many reasons for a surface retaining moisture and only one of them will give an accurate clue to direction. What follows is an important process of elimination.

However, if you manage to find a near vertical smooth surface that is not too close to the ground and it has moss growing on it then there is likely to be only one reason for that surface staying moist: it is in shade in the middle part of the day when the sun is doing most of its drying. It is very likely to be on the northern side in northern latitudes.

This process of elimination is quick and painless with practice and leads to far greater confidence in your conclusion about direction. It is also a very good discipline that helps in improving accuracy in most other natural navigation methods. In fact the most common problem I encounter when teaching the subject is when people jump from observation to conclusion about direction, without going through the important middle step of analysing what their observation is really telling them.

This discipline is important when using other surface-dwellers like algae. And it becomes even more critical when trying to use more complex organisms like the lichens. Moss is probably the best place to start though.

Moss thriving near the ground, where moisture is always evaporating.

Moss always grows where water gathers, even in south-facing spots.

Learn more about reading signs in nature in the books section.