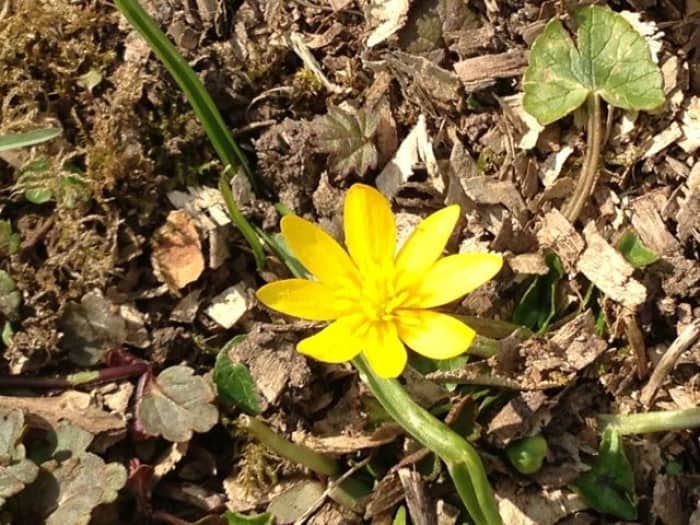 It is an exciting time of year, there is a lot of vernal energy pent up, all coiled and ready to leap over the barrier of recent low temperatures.

The wildflowers have been biding their time, but the next six weeks will force their hand.

From late spring to mid-summer it can be a case of clue overload as the wealth of new flowers draws our eyes in all directions. This makes early spring a good time to savour the few clues that are around. Almost everyone can recognise a primrose or a daffodil, so a good place to start is by noticing how they will orientate themselves towards the light. In an open patch, there will be a bias to the flowers to point between southeast and south typically, but there is often a fun reason if they do not follow this rule.

I led a walk in Chichester a couple of weeks ago and we came across a flowerbed in the park with a large number of daffodils. On average the flowers pointed south-southeast, but there was one small group that rebelled, their flowers facing north. The reason in this case was very easy to detect: they were close in to the north side of the tree growing in the centre of the flowerbed and no light could reach them from the south.

Lesser Celandine is out round here and it is a fun flower to return to during changeable weather at this time of year. It has traditionally been a herald of spring, but it can give clues to shorter term changes too. The petals of Lesser Celandine react very dramatically to changes in light levels. The photo at the top shows one in full sunlight. The one just below is one in shade. This tendency and the fact it was Wordsworth’s favourite wildflower, led to the following lines being engraved on his tomb:

There is a flower, the lesser celandine,

That shrinks like many more from cold and rain,

And the first moment that the sun may shine,

Bright as the sun himself, ’tis out again!

Flowers that change from hour to hour are fun, but from a natural navigator’s perspective, we need to be more tuned to habitat, as this what will give us the most dependable clues.

At this early stage of the year, Dog’s Mercury is the sort of wildflower that many people will overlook as its flowers are far from striking or pretty to most. However, it is abundant on calcareous soils when few other wildflowers are this early, and so it is worth befriending. It is notoriously intolerant of direct sunlight and a shade-lover. This makes it a fascinating plant to check in with on walks through woodland that fluctuates in light levels. Wherever the canopy opens up, Dog’s Mercury retreats and it is outcompeted by light lovers, but in places of steady shade it can form very extensive carpets. The most interesting places are broad tracks running east-west through woodland, wide enough to let in light. Critically on an E-W track, this light will typically reach the northern side of the path and be totally shielded from the southern side. Dog’s Mercury will be found dominating the southern verge and absent from the northern one altogether.

In the photo of Dog’s Mercury below, we should not be surprised to find it sharing a patch with Ivy, another infamous shade tolerator. But Ivy is another story altogether, and a deeply fascinating one. It holds three secrets for finding direction, and I will be writing these into the book I am currently working on.