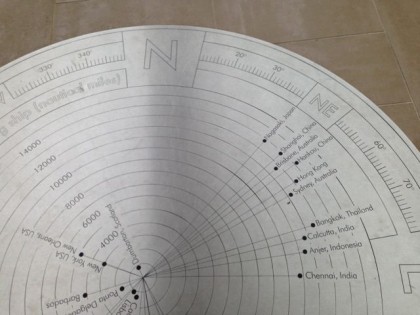 Don’t look at the photo just yet!

Thanks to National Maritime Museum members who came to my talk in the planetarium at the Royal Observatory in Greenwich last night.

Before the talk I took the opportunity to walk around the Cutty Sark, where I found the compass rose in this picture laid into the ground. Before studying the photo in detail, here’s a question to ask yourself:

Which direction would you set off in if you needed to get from London to Japan, following the shortest possible route?

The answer to the shortest route question is always to follow a ‘great circle’.

A great circle is the circle that wraps a sphere, ie. the Earth, in a way that means it would also cut through the sphere via its center. It is the same as the largest circle that can be made to go via two points on the surface of a sphere also, which is really odd. To be honest, however you describe a great circle it causes some confusion the first time anyone encounters one. But it is a fascinating and important concept for long distance navigation.

The important thing is that this leads to some counter-intuitive results for navigators. The route between any two northern hemisphere points will ‘bend up in the middle’, by which I mean you need to head a lot further north at the start of a journey and a lot further south at the end of your journey than most people would imagine. (Remember any great circle has to cut through the centre of the Earth.)

In the photo above, we can see the arrow towards Nagasaki, Japan. Nagasaki is actually well over a thousand miles south of London and yet the shortest route to it starts by leaving London on a heading of 040 degrees, that is not just north of east, but north of northeast!

If you are new to this concept and this makes your head hurt then don’t worry, it did the same to mine many years ago during aviation navigation exams. I believe it is a good sign.

I think that the reason why most would react with emphasis on ‘southish’ is because our history is dominated by the sea. From the UK (Europe) the great sea trade routes are inevitably south to get past, or to,  the great chunks of land without getting stuck in icy territory up north. So Greenwich and Cutty Sark make the point for me.

It is when you fly to Japan (11 hrs ?) or Beijing in long range aeroplanes that you realise that the most efficient route is on the great circle. Mind you when you look down at Anchorage or the Siberian deserts that you realise why our forefathers went on another ‘non great circle’ route. Nice places to stop off and people to trade with.

Thanks for your inspirational thoughts and treats.