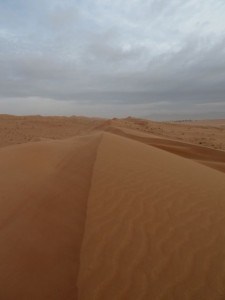 As promised, here is a more detailed update on my short time in Oman last week. My main reason for being there was to train the Omani Outward Bound instructors. In the short time available I wanted to give them a decent understanding of how to use nature’s clues to find their way in the desert. Just as importantly, I needed to give them the techniques and knowledge they could pass onto their future students.

We started with theory indoors at the offices of Outward Bound Oman, with the help of planetarium software and makeshift whiteboards (paper Sellotaped to a cupboard). After three hours of theory, it was time to head out in 4x4s for a 3 hour drive I updated to new link https://outwardboundoman.com/#nto the desert, for some more practical training.

We tracked the sun down to the horizon and confirmed that it had indeed set a good 15 degrees south of west. We looked at the way the wind had shaped some small plants and then how the crescent moon was pointing perfectly south. After some dahl and rice it was time to sit on the mats on the sand and get apply the astronavigation theory to the night sky. Jupiter beamed brightly from the east.

At a latitude of 23 degrees and at that time of year the Plough is too low to use, so we focused on Cassiopeia. I also pointed out the Navigator’s Triangle and the way the ‘cross’ of Cygnus can be used to find north. The final method we used was the square of Pegasus. More importantly we studied the movement of the stars, before settling in for an early night.

The following morning there was too much cloud cover for stars so we packed up and got ready to make the most of the early morning cool for some daytime exercises. Picking my mat up off the sand I was confronted with the realisation that I had been sleeping over an unwelcome guest: a scorpion (see photo below). This was the first of many encounters in 48 hours. (That night, I felt a tickle on my foot as I went for a pee and a flash of the headtorch revealed that worse than poor aiming, it was another good-sized scorpion crawling over my foot. Like hornets and other unwelcome ‘friends’, scorpion sightings are fortunately much more frequent than scorpion stings, which remain rarer and much less deadly than their reputation. That was hopefully of some comfort to Gary Lyon, a consulting instructor, who was sleeping nearest me and received a nasty scorpion sting on his foot. He was much more stoical about the whole thing than I would have been!)

We spent the morning looking at clues in the sun, the dunes, the trees, the wind and clouds. Then we did some exercises in gauging distance using paces and perspective.

We sat out the midday heat in the shade, which gave me a chance to have a really fascinating discussion with Eric Staples. Eric is an authority on medieval Arabic navigation, he has personally overseen the rebuilding of many historical Omani sailing vessels and has a passion for historical Arabic navigational techniques. Together we spent a wonderful couple of hours trying, successfully I believe, to unlock some secrets in a Arabic text regarding the use of the Pole Star by reference to the lunar mansions. It was great teamwork, Eric’s knowledge of medieval Arabic is of the highest order and my familiarity with some of the techniques they referred to helped us solve some tricky passages. Great fun, but not for the faint-hearted!

Later that day we were able to use a ‘kamal‘ that Eric had fashioned from traditional materials of wood and twine. This simple instrument was used by the earliest sailors and desert travellers as a means of establishing latitude. More on that another time.

I also was privileged to spend time with Dr. Andrew Spalton, the leading conservationist authority in Oman.

On the final morning at 5am we enjoyed good sightings of Orion, Leo, Mars, Gemini, Procyon, Taurus, Pleiades and a whole host of others. We used Capella and Auriga to find north. As the sun rose, 15 degrees south of east, it was sadly time to go.

My heartiest thanks to Mark Evans at Outward Bound Oman for inviting me to Oman and to his instructors for the patience and enthusiasm. What a country!

In the photo at the top we are looking north along linear sand dunes. These dunes form when two complementary winds channel the sand into long, often dependable dunes. The winds had clearly blown more from the southeast than the southwest, as the eastern flank was the firm shallower windward side and the western side was the softer steeper slip-face. How to Use a Kamal