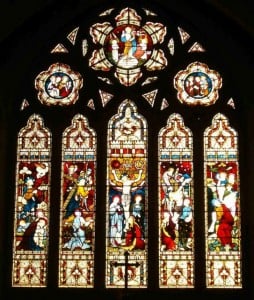 There is a wonderful article on the orientation of churches, from a 2007 issue of Archaeology magazine. My thanks to Doug for making me aware of it.

“Armed with a Silva compass fixed to a piece of wood with brass screws, over 10 years Ian Hinton surveyed almost 1,750 churches in England and Wales. He resolved an old belief – but uncovered a new mystery.”

For those who do not have the time to immerse themselves… the answer is yes, churches do face east , but not perfectly and the discrepancy varies with location. The average ‘error’ is only 4 degrees, which is pretty good.

There are some tendencies that are very interesting: mainly that a church is more likely to be aligned north of east if the church itself is situated in the west of the country. This is a trend that the author, Ian Hinton, says can be carried outside this country and will hold as far as a survey done in Denmark.

Ian Hinton does not have a working explanation for this and I do not have a confident answer, but one theory that might be worth testing is whether the discrepancies correlate with a change in magnetic variation/declination (the angle between the magnetic north pole and the geographic north pole from any location). It is quite possible that all but the earliest extant churches were aligned and built with the help of a compass.

Magnetic variation changes with any change in longitude or latitude, but it also changes slightly from year to year. Historical data is available and so this could be tested by a PhD student. One other intriguing possibility, however unlikely, is that Ian Hinton may have used a uniform magnetic variation when measuring the alignment. This would automatically lead to inherent ‘trends’ in different parts of the country.

How to Find Your Way in the City