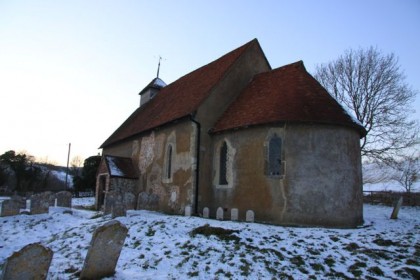 My thanks to Leon Winnert – a double Natural Navigator course alumnus no less! – for taking the time to research church alignment in his area.

His findings are interesting and urge caution on placing too many eggs in the W-E church and graveyard alignment basket.

This is true of all natural navigation observations taken in isolation and there are anomalies in all methods, including the sun and stars.

However, I was particularly interested to note that there was a pattern to the anomalies he found – patterns to the break in patterns – wheels within wheels.

My overall experience, nationally and internationally, is that the W-E alignment is still a good one, especially where it correlates with other findings (churches are a Mecca for lichens for example – forgive the metaphor!).

It is good to have more data on the church alignment patterns and thanks for investing this time, Leon.

Alignment of Churches and Burial Yards

In the spring of 2012 I found myself taking a short cut through the Brompton Cemetery in London. Having a new awareness of natural navigation I stopped and said to myself I’m in a graveyard so where is East? The graves will tell me that. I looked at the graves assessed their orientation and found that there was no consistent orientation. The only consistency was that the grave’s headstones and memorials faced the paths that crisscrossed the cemetery.

The sun was out, so using my wristwatch, making appropriate compensation for BST, I determined where East should be. It was certainly nothing to do with the orientation of this graveyard. Total confusion! But the given wisdom says the gravestones are always aligned east-west. It’s one of those givens we have always known so what has gone wrong?

This set me off on a quest to find out if the received wisdom on orientation of graveyards and churches is in fact valid. Now at the time of starting this investigation I was aware of a paper that had been publicised on the Natural Navigator website whereby somebody had researched orientation of churches and found them not to be orientated exactly east-west but within a few degrees of that. Well the results of my own researches have thrown the conclusions of that particular learned paper into question. They have also reinforced something my Grandmother used to say. ”Believe all of what you see, half of what you read, and nothing of what you hear.”

In a not very random manner I began visiting burial sites with or without an attached church. In all I visited 22 sites, 13 with church and nine without (burial yards). I visited a fair number of sites in Horsham (where I live) and a number of other places in Sussex which quite frankly just interested me. I also visited a number of places in London. The attached table lists all the places I visited plus gives information about my observations. The green highlighting picks out those sites that are with in 10 degrees of east – west. Where possible I checked out historical magnetic variation / deviation to see if when laid down the sites had been orientated to magnetic east. There is no evidence of this being the case.

Of the churches I visited seven were mediaeval one Georgian and five Victorian. Of the burial yards I visited one was 17th century five Victorian two were 20th century and one was of unknown origin date. In taking these sites and considering East West alignment within plus or minus 10° I found that just over half the churches conformed to this criteria were as only one third of the burial yards did.

Only the oldest and youngest of the burial yards had true east-west alignments. And they are Bunhill Fields just outside the City of London, mid 17th century. And Botolphs Non Denominational Cemetery at Botolphs in West Sussex, late 20th century. A consistent feature of the Victorian burial yards is that the graves face the paths. And the paths seem to fit the local geography. For instance in the Brompton Cemetery which is flat and rectangular the main avenue is straight, 60° off of East and at right angles to the main roads at either end. All other paths are either at right angles or parallel to it. On the other hand Highgate West Cemetery is on a hill with the paths snaking and curving around the site. Which means of course that the graves here are facing every which way. Highgate East Cemetery has some curved paths but mainly straight ones 20° off of East etc.

Now all the burial yards and churches I visited were of Anglican or nonconformist denominations. However, out of curiosity I visited the Hoop Lane Jewish cemetery in Golders Green. That threw up quite a surprise. The cemetery is divided into two parts, the east side is a traditional Sephardi Cemetery. Gravestones laid horizontally and facing nominally 150° to 160°. The west side for all other Jewish traditions has horizontal gravestones and here the graves face anywhere between 300° and 340° dependent on the sector of the site. The two halves of the burial yard faced in opposite directions; make what you will of that.

In conclusion what I can say in respect of burial yards is that basically Victorian sites are non-aligned. Factors affecting the alignment are very much influenced by adjacent roads. The site is either parallel or at right angles to the road. And in terms of the burial structures, as we all know Victorians liked to make statements about themselves and therefore the grave site orientation appears to be all about visibility (i.e. always facing the path) and nothing to do with religious convention. This can be very clearly seen in the St Pancras Church (just by St Pancras station). Where mediaeval graves were cleared away to make way for the railway and the post-railway Victorian edifices face every which way.

Churches fare much better in their alignments and in so doing do the graveyards, which themselves are in line with the church. The older the church i.e. 11th or 12th century the better the alignment. However, as noted above there are exceptions. The most significant example being All Saints in Roffey which is aligned parallel to the road making it 55° out of alignment.

Bottom line? Be very wary of blindly using church or burial yard orientation as a means of knowing direction. If it is Victorian or anything to do with the Victorians forget it. Be cautious – but not necessarily dismissive – of anything that is parallel to or at right angles to the adjacent road. If it’s very old the road could have been aligned to match the structure not the other way around. The only trustworthy sites appear to be medieval or earlier. Yet again maybe I can stretch a point up to the 17th century.