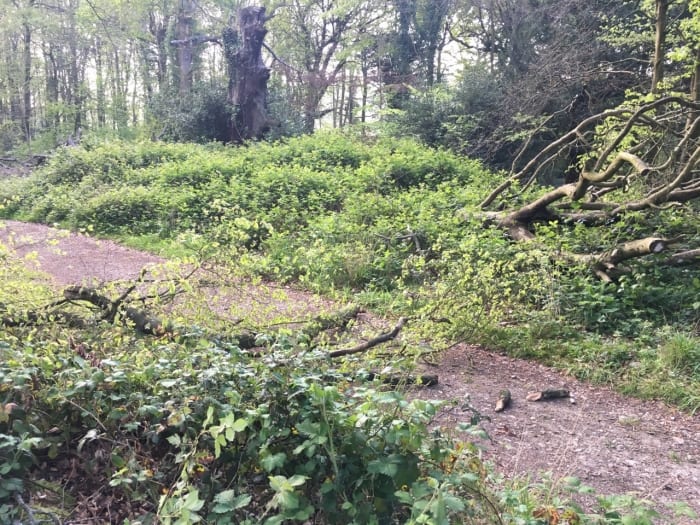 This is a common sight in my local beechwoods.

Beech trees have a habit of dropping large branches without much warning. They are not good ones to camp under!

It may be why they earned the nickname ‘widow maker’.

One reason is that the lower branches are shaded by higher ones, leading to their eventual demise.

Another is the significant change of weight in spring affecting beeches more dramatically than others.

The debate goes on though, so if you have any other insights into this phenomenon please get in touch.

(Willows also have a habit of collapsing under their own weight, but the smaller branch size makes them less fearsome.)

I’ve just received an interesting email from ‘Rees’ in the Peak District:

I was always told that beeches collect water in the ‘crotch’ between branches and trunk, owing to the angle at which beech limbs typically grow. You can also find crotch pools (as I think they’re known!) in oak, ash and sycamore (most frequent of these three), but I believe none are as susceptible as beech. The freeze/thaw effect might explain why I’ve known beech trees to drop branches in winter, before the sap starts flowing.

And this from Nigel Parrish,

After prolonged dry periods and very hot weather beech can shed lower limbs as ‘sudden drop’ – maybe because Beech are quite shallow rooted and water uptake may be insufficient in drought conditions.