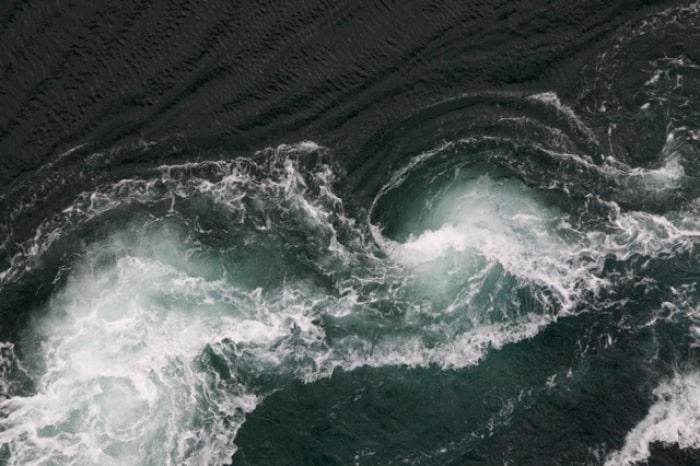 My thanks to John Luke for this email and this fantastic photo of the Saltstraumen maelstrom.

Your rip current story brought memories flooding back of my own similar event in Ghana thirty years ago today.

It happened on 7 October 1986, I was a pilot with British Caledonian Airways, flying the DC-10, and this was my first stay in Accra – we flew in via Kano in Nigeria, had four days off then back to Gatwick via Abidjan.

The whole crew went to Labadi beach every day, and I had taken a boogie board having heard the surf was good. The first day I body-surfed, and on the second day took the board. The surf was the biggest I had ever swum in, a good 8-10 foot and powerful – I had no fins and tried unsuccessfully for ages to get out. I gave up and came in for a rest, planning to body-surf later. As I strolled up the beach I heard the lifeguard’s whistle – he was waving at a chap walking in thigh-deep water outside the red flag (safe) zone. I was aware of rip currents on this beach, and was always cautious somewhere new, something that my father drummed into me as a boy on holiday in Perranporth, a beach that taught me about troughs and undertow.

As I watched, a large wave knocked the man into a hole, and when he surfaced he was rapidly getting smaller as the rip took him out to sea. The lifeguard whistled and waved for all he was worth – I realised that he was not going to do anything else, so I dumped my board on the beach, ran in and dived into the rip. I managed to keep him in sight for a while, swimming front crawl with my head up; but within a very short time indeed I was outside the surf zone wondering where he had gone.

At this point I realised what an idiot I was – now it was Africa getting rapidly smaller with my only flotation device sitting on the beach. I scanned the ocean all around with no result, and started swimming backstroke parallel to the beach to try to escape the current. After some forty strokes I stopped for a progress check, and was pleased to see, as I looked towards the beach, the curved back of breaking surf instead of the flat rip zone. The swell was big with choppy waves as well, and I decided to save myself and swim for the beach. As I took a last look round from a crest a head popped up out of the waves about ten yards away!

I shouted, swam over and stopped just out of his reach – he was belching and spitting out seawater so I reckoned he had spent a fair time underwater. Now I was scared he would grab me and drown us both so (after curiously British mutual introductions had been made) I made him turn round so I could drag him backwards in the approved manner. After a few kicks he began to struggle, not keen on the waves and spray blowing into his face.

We turned round, and I said “swim towards the palm trees”. “What trees?” he said…. then explained he was very short-sighted. I grabbed his upper arm, and pulled him along with a sidestroke kick, while he did a sort of breaststroke. In this way we made slow but steady progress towards the surf zone, as I tried to work out how we might survive the excitement to come. I explained that we would get thrown around a bit by the surf; I would tell him when to hold his breath and that he was not to breathe again until I said he could… and I promised not to let go of his arm. From the crests I could see people on the beach following our progress – by this stage we were a good quarter of a mile down the beach from our start point.

And it was very exciting – three intensive spin cycles, each one seeming to go on for ages, with enough time between them for just three or four breaths. We touched bottom several times on the way, then suddenly we were standing in waist-deep water with helping hands dragging us towards the beach. My legs turned to jelly and I crashed out for an hour in a palm-frond hut.

The chap turned out to be an Irish Catholic missionary, down from his village near Kumasi for some R&R in Accra. He had buried his specs and bible in the sand before his unplanned swim. We had a long chat the next day – when I got to him he had already given up hope of rescue and had no idea which direction to swim due to his poor vision. He was quite surprised to find that an atheist had answered his prayers!

I slept very badly for a couple of nights – whenever I closed my eyes I was back in the ocean going up and down in the swell. But back on the beach I did learn to use the rip (and my board!) to get out behind the surf, and finally caught a few waves in Accra.

1. Always study the sea before you swim.

2. Next time take the board – that would have been a fun ride in!

3. Not all lifeguards can swim.

I now look forward to reading about natural navigation…