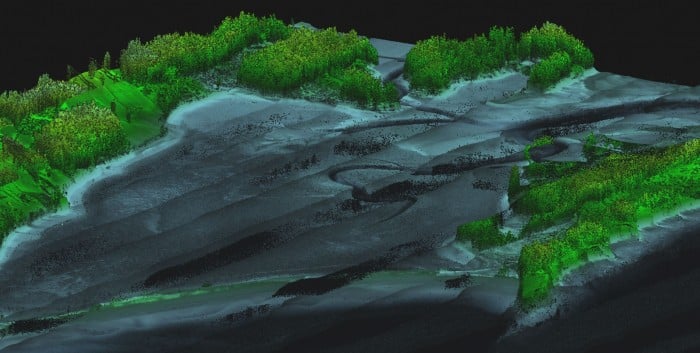 I spent a very enjoyable Friday evening at the Hornet Services Sailing Club in Gosport.

I was there to listen to a talk being jointly hosted by the sailing club and the Royal Institute of Navigation, titled, ‘Where the Rocks Aren’t.”

The title is a reference to the hydrographer who when once asked,

“Ah, so you’re the man who can tell me where the rocks are?”, replied,

“No. I’m the man who can tell you where the rocks aren’t.”

The talk was given Dr. Norman Kean, editor of the Irish Cruising Club‘s Sailing Directions for 10 years, and it addressed the question:

“Is there still – in the age of multibeam sonar and LIDAR – a role for the amateur hydrographer?”

Dr. Kean’s answer was an emphatic yes, of course. The talk as a whole was an entertaining tribute – delivered in a fine, porridge-thick west Scottish accent – to the remarkable effectiveness of the Mark I Eyeball.

The most poignant part of the talk for me was the reference to the ‘white ribbon’. This is the thin strip of water closest to land that is hard for expensive survey vessels to zap with their many electronic toys.

The irony, one that all small boat sailors know only too well, is that the deeper the water, the less critical accurate surveying generally is. So we have a strange situation where the incredible accuracy being achieved by modern hydrographical equipment, is at its weakest where it is needed most. (On the bigger oceans, so long as you do your homework sufficiently well beforehand, you can sail for more than a week without needing to scrutinize a chart.)

Another astonishing detail I learnt was that many electronic charts are relying on Ordnance Survey data for the rendering of coastlines. This is good accurate data by and large, but the problem comes because it is very tempting when looking at an extraordinarily detailed coastline on an electronic chart to leap to the assumption that the water around that headland has also been charted with accuracy. But the Ordnance Survey are not in the business of surveying water, so there is sometimes a dangerous clash between a near perfectly accurate coastline and water very near to it that may not have been surveyed at all accurately.

Put another way, your electronic chart might keep you safe from hitting the mainland, but perhaps not from running into a rock fifty metres off the mainland.

A good pilot book combined with a good lookout will hopefully keep you safe from both perils.