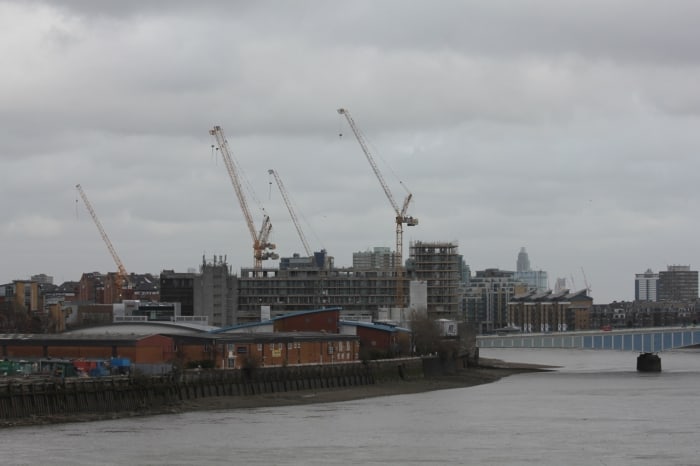 If you like really esoteric natural navigation clues, then you’ll love this urban one.

There are hundreds of clues that rely on our understanding of what the wind is up to and this clue is part of that large family. If we know which way the wind has been been blowing over the past hours or days, then we can find our way in the middle of the ocean, in the Antarctic, in the Sahara and… in cities.

When strong winds hit a city, the construction cranes – and there are always some – have to stop work. They are turned so that they are least vulnerable to the high winds. The counterweight (those big blocks of concrete behind the cabin) are aligned into the winds, so that the longer more vulnerable part of the crane points downwind.

Once you’ve tuned in to which way the strong winds are due to come – or are already blowing from – then each one of these cranes will act as a compass. This picture of the area near Battersea Bridge in London was taken today, there are strong southerlies hitting the capital, so the counterweights are pointing close to south and the long arm of the cranes indicate north.

There are five in the foreground, but there are others worth looking for in the background too.

My thanks to Captain JP for the photo and for passing this on. Love it.