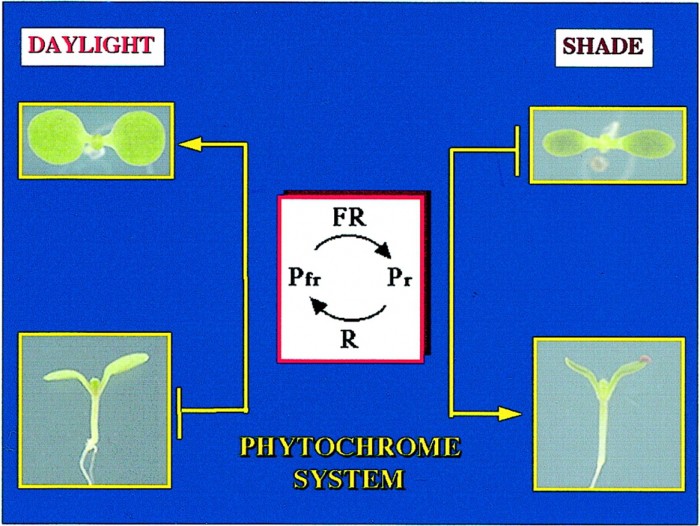 Plants have no brain or central nervous system, so calling them ‘clever’ might sound a bit stupid.

But… plants do achieve some remarkable things. Plants respond to shade in a way that can seem just a little bit too strategic for a group of simple chemical reactions. The group of reactions that plants use to respond to low light levels has a collective name amongst botanists. It is known as ‘shade-avoidance syndrome’, which sounds more like something my wife suffers from on beach holidays than botany.

I’ll give you a clue: it’s not in the amount of light they receive. Have another go.

The science: all green plants photosynthesize, that is they turn light energy into chemical energy, in the form of sugars. Photosynthesis absorbs a lot of light at the red end of the spectrum (this is part of the reason leaves are green in the first place). However, although photosynthesis absorbs lots of red light, it doesn’t absorb far-red light, the light even further along the spectrum. Green plants have a pigment called ‘phytochrome’ in their leaves, it is a chemical that acts as photoreceptor. This pigment is sensitive to the ratio of red light to far-red light. Shade cast by plants has higher levels of far-red light to red light than shade cast by a rock or wall.

So plants will react in slightly different ways if they are trying to outcompete other plants than if they are up against a rock, literally. Growing taller, curving, delaying flowering are just some of the peaceful weapons plants will use against each other.

These responses are part of the broader field of phototropism, plant growth in response to light, which is an integral part of advanced natural navigation. In short, if you know everything about the way a plant responds to light and you know the direction that the light has come from over time (that is you have both the botany and the astronomy covered), then the stories the plants are trying to tell you about direction become a lot more interesting.

If you’re keen for an even bigger helping of the science behind this then there is a (free) academic paper on the subject.

Hope you enjoy, I’m off to give a stinging nettle a game of chess.