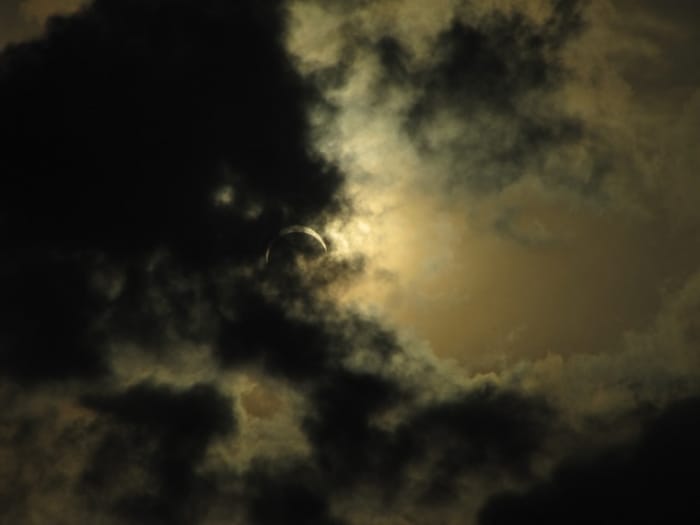 The photo above was taken shortly before the recent total solar eclipse, by my uncle, Tuppin, who was and remains in Uganda. Everyone should have an uncle in Uganda, ready for such eventualities, but sadly so few do these days.

Totality – the total obscuration of the sun – lasted about 24 seconds.

Historically, eclipses were used to help solve astronomical and navigational puzzles, because they were once one of the few very clear ways people in different parts of the world had of marking time. Before John Harrison’s chronometers solved the time problem, eclipses acted as a sort of global gong, marking exact moments in time and allowing astronomers, navigators and others to compare observations from different places on earth with reference to time.

From my book, ‘The Natural Navigator‘:

“Eclipses appear at different times of the day depending on the observer’s position and Hipparchus used this to propose that lunar eclipses might be used for establishing longitude. The same famous eclipse was simultaneously observed during Alexander’s victorious battle at Arbela and at Carthage. They appeared, in terms of a solar day, to have taken place approximately three hours apart, which led to the belief that the two places were 45 degrees apart (3 x 15 degrees). The actual distance is closer to 33 degrees. Eclipses, although theoretically valid as chronological reference points, are not nearly frequent enough to be a practical solution for navigators on the constant move.”

The logic behind an eclipse as a marker of time, is similar to that behind the transit of Venus, when Venus passes in front of the sun. This happens very rarely – only eight times in a thousand years – and led to a lot of excitement in the 18th century. It was the public reason for Cook’s first great circumnavigatory voyage.

A transit of Venus, such as the one in 1769, was a very rare opportunity to compare views from different parts of the globe at the same time and hopefully solve all sorts of riddles as a result. Not least how far we were from the sun. (The less public reason behind Cook’s first voyage was that the naval establishment felt very strongly that Britain was pretty Great and wanted things to stay that way. Exploration, in this case the search for ‘Terra Australis Incognita – the unknown southern land’, was felt to be an important piece of that jigsaw. This is why Cook ended up going all over the place, instead of a neater return trip to the observations made in Tahiti.)

We get eclipses when three bodies, the sun, moon and earth, form a straight line.

Whenever three celestial bodies form a straight line, this is called a ‘syzygy’, which has to be one of the most beautiful words in the English language. Until I get more excited by another one anyway; I’m not always faithful to words.