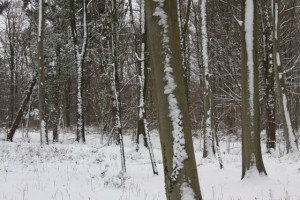 I took these two photographs during a walk in the woods on Friday morning.

The second picture was taken facing the opposite direction to the first, but which direction are they both taken in?

I will update this page with an answer in a few days.

Don’t forget: 9 more days to go in the Winter Clues competition. Still very few entries and it’s wide open, so every entry in with a good shout. This question is really a test of wind and weather awareness. The heaviest snow often falls as part of a snowstorm, or at the very least with strong winds. When this happens the snow gets plastered onto the side of trees and any other obstacles that gets in its way.

The heavy snow that fell on Thursday night was slightly unusual in that it blew in from the Southeast. Heavy snow in the UK nearly always comes in from between North and East. It is rare to get heavy snow with a southerly component to the wind, but it definitely did happen last week.

To answer this question you just needed to know two things:

a) Snow often sticks to trees and creates these telltale vertical strips when it’s windy.

b) Last week’s heavy snow blew in from the Southeast.

In the second picture we are looking in the direction the snow-bearing wind came from, we are looking Southeast. This is why the trees appear totally clear of these vertical snow strips.