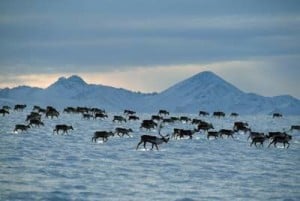 For a slight change, I thought I would add a little correspondence from Bob Boxberger to the website. I enjoyed these perspectives and Bob was kind enough to allow me to share these exchanges with you – thanks Bob!

Just finished your book “Natural Navigator” with pleasure and interest. In that book’s Chapter 8 you describe navigation feats of migratory birds.

That prompts me to offer you a note for your bird navigation file derived from an experience of mine as a young soldier stationed at Cold Bay, Alaska at the end of World War II.

Cold Bay is at the west end of the Alaska Peninsula, just before the Aleutian Island “Chain” begins. At time I was there, tens of thousands of migratory waterfowl came there for the summer mating season at Izambek Lagoon. They arrived in all weathers and at all times of the day or night.

My most memorable observation of their flight occurred about 9 p.m. one blizzardy spring night watching a solid stream of geese flying in the driving snow through the vertical beam of the intense lamp used to measure the bottom of the cloud layer. It required weeks for all the migrants to arrive in their cackling skeins, apparently flying 24 hours a day, often in weather that kept our aircraft grounded.

Thank you for your book, it goes on the shelf with Gatty’s work.

Thanks for reading my book and your kind email, I’m so glad you enjoyed it.

I enjoyed your wartime recollection and I’m sure others would too. Would you be happy for me to publish it on my blog?

PS. I don’t doubt that Cold Bay earned its name at times!

Hi Tristan: I answer easier to “Bob.” And I have no objection to you publishing that wartime recollection of mine. You might even harvest a few more of its ilk if any of my former comrades in isolation read your blog. Several of us wondered at the time how geese could navigate at night in a blizzard against a headwind upwards of 15 knots, always on-course toward Izembek Lagoon.

Indeed, Cold Bay was cold. Though it never iced over, if a person fell in they were dead of hypothermia, usually within five or ten minutes.

Another story of natural navigation popped into my mind as I thought back to those times (you may publish if you wish). During the late fall of 1946-47 (could have been ’47-’48) the caribou migration of a then-estimated one million animals virtually unhunted by man during the war years moved southwest along the Alaska Peninsula to their winter grazing on the tundra northwest of Cold Bay. The story from pilots of Reeve Aleutian Airways (low-flyers all) and the area Aleuts was that anyone lost on or above the peninsula at that time could find their way to either end of the peninsula simply by following the blood trail left in the snow by wolves slaughtering the caribou stragglers. I never saw it, but I heard it enough times from different observer sources that I’m still willing to give it credence — and I did see the milling thousands of animals on the tundra.

Please forgive the reminiscing of an old gaffer, I have my own story of locational disorientation, too: I passed through Bangkok in April, 1987. I awoke early the first morning I was there, repaired to a terrace to enjoy the sunrise with my coffee, and was hugely discomfited to witness the sun brazenly rising in the West. Intellectually, I knew that that couldn’t be, but all of my natural senses told me that the world began turning east-to-west as I slept. Although I possessed a very good pocket compass, I could not shed myself of that sensation until I arrived in Kathmandu below the comfortable east-west line of the Himalayas. I have no notion of how such a disorientation could occur, even when contradicted by my own instrument.

My best regards, and gratitude for a stimulating read,

Having newly come to your website, today I was scanning back-dates and came across your Nov. note on fear.

Although I don’t purposely place myself in navigational situations where outright fear is a factor, I managed to do so last September while making pictures in the Pinnacles area of Canyonlands National Park in Utah, USA. I’m not proud of the experience, but it may serve as a modest alert to others.

I was new to the area, had no maps worthy of the name, nor a compass. I had a foolishly self-imposed 24-hour period of noon to noon for my venture to a photo site gleaned from a passing local acquaintance whose judgment of time and distance I should not have accepted. I did have sense enough to sling on a rucksack containing water, a headlamp and minimum survival gear.

My solo trek to the recommended site began too late in the day, and I stubbornly stayed with it too long. I was benighted on so-called slick rock in the warm fall evening with only the small cairns left at crucial but widespread points by thoughtful predecessors to guide me out of some fairly tumbled and confusing terrain.

While congratulating myself on the wisdom of including my headlamp, which lighted my way from cairn to cairn, I listened with delight to the song of katydids starting up ahead of me as I moved along. That was when the fear struck — It was many years, decades really, since I had traversed nighttime landscapes in the Southwest. It came to me that katydids become quiet with the approach of a human, but night-hunting rattlesnakes do the opposite.

At that point, my camera was in my rucksack and I was using its monopod as a walking staff. Without that monopod, I believe I would have stopped (and should have) and bivouacked on the rock, wrapped in a mylar survival blanket. Instead, I extended the monopod its full length, about five feet, and used it to sweep the darkness ahead of me, scrambling down rock slots and across shelves, wondering whether I could make it back to my car should a rattler hit me in the upper body from one of the occasional waist-to-head-high ledges.

Obviously, I made it back, hugely relieved to detect the reflection of my headlamp on my car’s license plate. But I still blush in chagrin when I recall my errors. Perhaps someone can take a lesson from those errors.