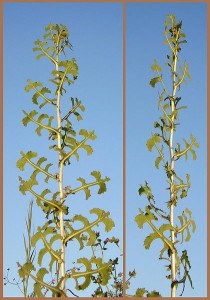 Prickly lettuce is known to some of its navigating friends as the ‘compass plant’ and to its Roman friends as ‘lactuca serriola’.

In truth it is only one of many plants with the compass plant nickname (Silphium laciniatum in the US is another one), but it has earned it.

In open ground, the leaves of the main stem are aligned north-south, offering the least surface area to the midday sun, but the maximum area to the weaker light of the start and end of the day. (This is a similar logic to the N-S alignment of termite mounds in hot parts of the world.)

Despite aligning itself to avoid full sunlight at midday, this is a sun-loving plant and can be found in areas exposed to direct sunlight in southern Britain and across Europe.

It is typically found at roadsides, railways and other verges, flowering in late summer (July-September).

A 1985 academic paper detailing its distribution can be bought by clicking here.