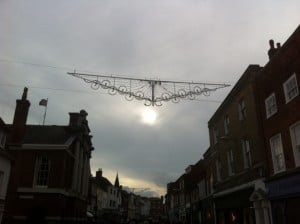 I took this photo in Chichester the other day, at midday.

You can probably eliminate a couple of those quite quickly, but which of the remaining ones is it?

It’s not a great photo, taken on my iPhone whilst walking, but there are a couple of good clues.

I’ll update with an answer in a few days.

We are looking due south on North Street.

The clues are: the midday sun plus the flag blowing from right to left, ie. from west to east.

At a stretch, the furthest building we can see is slightly bigger than all the others. As a general rule, buildings get taller towards the centre of towns, which is a clue that we are looking south on North Street, not south on South Street. Yes, I know, not very clear at all in this picture, but not a bad general rule if you are totally disorientated in a town.