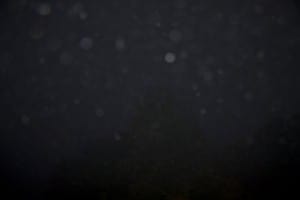 Could this photograph of distant trees be the worst one I have taken this year? Maybe not.

When the fog descends there is a great temptation to believe that nature is offering us little to work with. This is rarely true.

During a short dusk walk this evening my senses alerted me to 3 different, but related things.

1) I could not see very far. This did not come as a surprise, it has been misty all day.

2) There was a strong smell of burning logs.

3) Everything sounded a bit different.

The explanations are as follows:

1) Water in gas form is invisible. The warmer air is, the more water it can hold in gas form. This is why we can normally see easily through air, even though the air often contains large amounts of water vapour.

However, when the temperature drops to a certain level or the amount of water vapour rises to that level, the air reaches saturation, at what is known as its ‘dew point’. This is the point at which it throws up its hands and says, ‘Hey, I’ve done my best, but I’m just not carrying anymore of this water vapour. It’s on its own now.’

At the dew point, the water gas condenses to form liquid in the form of water droplets. A cloud forms in the sky at the altitude where the temperature drops to the dew point. If there is a huge amount of water vapour in the air, then the temperature does not need to drop very far and we get lower clouds. A little more vapour and we get clouds down to ground level: which we call fog.

The temperature drops at night which is why we often see fogs last thing or first thing in the day. Fog is often worst in the middle of the night, but we remember the times we see it, hence it is best known at dawn or dusk.

2) The strong smell of smoke indicates that the smoke, from log fires that are being burned to repel the cool autumnal damp in the neighbouring villages, is not escaping. It is locked down close to the ground, and the most likely reason for this is a temperature inversion. When cooler air gots ‘locked’ under warmer air, the lower layer cannot escape and smoke can be seen to travel horizontally sometimes under an invisible ‘glass ceiling’.

Inversion layers increase the likelihood of fog and are common in coastal areas.

This can be especially helpful in natural navigation, as fog is notoriously challenging. The slightest sound can offer very welcome assistance. The distant rumble of a road has a peculiar beauty at such times.