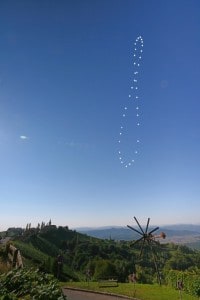 If you stood on the same spot and took a photo of the sun every day during a year’s worth of good weather, at exactly the same time each day…

…You might expect to see the sun moving up and down in the sky. But sideways?

In fact it would trace a figure of 8 in the sky. This shape is called an Analemma.

This has nothing to do with ‘daylight saving’ or any of the other artificial clock changes.

It is caused by two factors. The first is well known and understood by most people:

The Earth’s axis is tilted, which gives us the seasons, and it is this that explains why the sun is higher in the sky in summer than winter.

The second is less well known:  the Earth does not orbit the Sun at a uniform speed. When it is marginally closer to the Sun, near November, it moves faster and when it is slightly further from the sun it moves more slowly. It is only a fractional difference, but it does mean that in November the sun does appear to be racing a little, overshooting its mean 12 ‘o clock position in the sky. Near July it is moving more slowly and lags slight behind this position. (The difference in distance of the Earth from the Sun during the course of a year also means that the Southern Hemisphere summer is fractionally shorter and more intense than the Northern one.)

If you add these two motions, the vertical angle and the horizontal due to the speed change in the seasons, the result is a figure of 8 in the sky over the course of the year: the analemma.

The difference in time between what an accurate watch calls midday (which is based on the mean average over the course of the year) and the actual solar midday – when the  sun is highest in the sky each day – is called ‘The Equation of Time‘.

Critically, from a natural navigation point of view, if you took a photo of the sun at true midday each day – that is the moment when the sun is highest in the sky – there would be no sideways movement and you would only see the vertical one due to the seasons. You would in fact see a vertical line due south of you in the sky. This line would be 47 degrees from top to bottom, as this is the difference in height between the summer and winter solstices. It is also the reason that it is 47 degrees between the Tropic of Capricorn and the Tropic of Cancer, each Tropic being 23 and a half degrees north or south of the Equator.