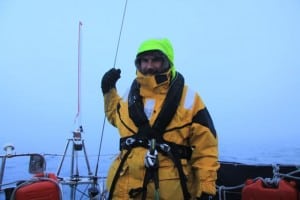 Yesterday I arrived back home after sailing north from Scotland via the Faroe Islands into the Arctic, finishing at Reykjavik. I used the trip to study the relationship between the environment, the distance to land and other factors like depth.

I’d like to thank my Mate and only crewmember, John Pahl, for volunteering for such an unlikely voyage and for being such an invaluable help throughout the trip.

There’s lots to report both here and in the articles I will be writing, but in the meantime I’ve just got time to share what felt like a great omen before we departed from Kirkwall in the Orkney Islands.

Looking across the harbour from where my Contessa 32, Goldeneye, was moored, I noticed a medium-sized commercial vessel. At its stern were a couple of navigational buoys.

These buoys are known as ‘cardinal marks’ and tell seafarers which side to stay to be sure of being in safe water. For example, the buoy to the far right of the picture is called a ‘southerly cardinal’ (both arrows point down) and it means the safe water will be found to its south, dangerous water to its north. The vessel before me was clearly planning to lay these buoys out at sea and as a professional navigator it is a fairly unusual sight. I noticed her slipping her bow lines – she was heading out to sea and so I ran round the harbour walls to get a better look at her before it was too late.

As I drew closer I saw the name of the vessel. I didn’t say anything to anyone at the time, but it felt like a really good omen for a natural navigator. I was to be preceded out to sea, by a ship going out to help navigators, with the name, ‘Pole Star‘. The least superstitious of people become susceptible to such thoughts when a thousand miles of wild ocean lie ahead.