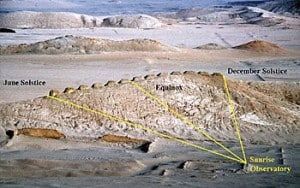 In the desert of western Peru there are the remnants of a civilization that still holds many mysteries.

Archaeoastromomers are able to deduce a few things about the ancient complex at Chankillo, from the alignment of 13 towers.

The towers form a north-south line, but this is not that unusual in ancient buildings. The thing that sets these towers apart is the fact that they span the annual range of sunrise, from winter or June solstice (northernmost tower) to summer or December solstice (southern tower), when viewed from a certain point.

There is a good view of the towers here in a short feature by, soon-to-be-labelled -‘national treasure’, Prof. Brian Cox.

In this way the towers form a solar calendar.

Whichever equinox, wherever you are in the world (outside the Arctic and Antarctic), the sun will rise due east at this time of year.

Time and direction are always two sides of the same solar triangle. The other side is the latitude of the observer. So, once you know two out of latitude, time or direction you can use the sun to work out the other.

The relationship between time, direction and latitude in the sun is critical to use of the midday the sun to navigate and it is easier in some places than others. It is easy in the temperate regions of the world and more challenging in the Polar and Tropical parts of the world.

If you know it is middle of the day, then the sun must be due south from Europe and the USA, or due north from New Zealand.

Peru is in the tropics which means that you need more time information to know the direction of sun at midday; you need to know the time of year as well as the time of day. This is because in the Tropics, the sun can be due south, due north or overhead at midday, depending on the date.

In the Arctic, as elsewhere, the sun will still reach its highest point in the sky at local midday and its lowest point at midnight. The same is true in the Antarctic although the directions are reversed (the sun is due north at midday in the Antarctic). It is made more challenging in these regions because there are times when the midday sun will be under the horizon. Even when it is not, the angle of the sun’s rising and setting is so slight at high latitudes that it is hard to gauge the exact moment of midday or midnight.

Here is a photo I took recently near the middle of the night, looking north from a small yacht, off the coast of Iceland. Latitude is the third part of the solar equation of: Time, direction and location of observer. If you know that it is near the middle of the night and you can see the sun in the north, you can work out the missing pieces: you must be north of the Arctic Circle and it is near June.

If you can see the sun and it is due north, but you don’t know anything else, you can work out that it must be midday or midnight, depending on your latitude.

You can take away any of the variables of latitude, time or direction of the sun and providing you have the other two, you can still build the triangle.

It can sound confusing at first, but it is all logical and with a little practice with websites like Stellarium or by using a sunrise/sunset calculator, you can fit the pieces together.

Archaeoastronomy is the art of finding these relationships stamped into the ground by earlier civilizations. As the latitude of the civilizations change, so do the shapes we find in the ground. Chankillo, Maeshowe and Stonehenge all appear to be very different on first glance, but they are all built using the same solar triangle of: latitude, time and direction.