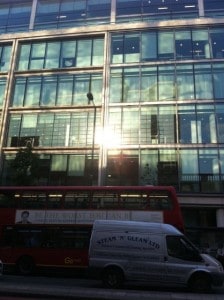 A couple of days ago I got off the train in London Victoria station at about 6.40pm.

I knew the place I needed to get to was only about a kilometre from the station and I was looking forward to a nice little urban natural navigation exercise.

As always, one of the first things I did on stepping outdoors was to glance up. It was a very confusing moment indeed and I temporarily lost my bearings completely. Why?

There are two clues in the photo. The first is probably almost as straightforward as you first think it is, but not quite. The second a bit trickier, but may have influenced me subliminally.

Many natural navigators like to keep a running tally of where the sun is in relation to them, even when it disappears behind trees, clouds or buildings. Once a relationship with the sun is developed to a certain level, the sun becomes a compass, its position in the sky combined with time equates to direction.

I have written elsewhere that the difference between the ancient view of the sky and the modern one is that the ancients did not differentiate between the position of the sun and direction: for them the sun was direction. For the ancient mind, the sun in the middle of the day was not used to find south, it actually was south.

This idea may take a little getting used to initially, but that is because we are modern. It is as foreign a concept as a city-dweller trying to grapple with the notion that we eat to stay alive.

In cities we all quickly grow used to seeing the sun’s light bounce off glass. The first couple of times in our life that we experienced this, it probably did seem a little strange, but very soon our brains adapt and we are no longer confused. The process of understanding that the sun is not where it appears becomes subliminal.

Babies go through a similar process of working out that the baby opposite them that always manages to touch their finger at exactly the right moment is, in fact, a mirror.

When I stepped out of Victoria station and looked up I already had a vague sense that I was looking west, from past experience. When I saw the sun reflected off the building my brain flipped it for me without my needing to think too much. But then a short, but terrible feeling of ‘wrongwayitis’ and confusion followed.

Somewhere deep in the neural networks a subconscious analysis may have looked something like this:

You are probably looking west, we know this exit.

Therefore you should expect the sun to be somewhere in front of you.

Ah, there it is, excellent. No wait a minute, correction taking place, that is a reflection, the sun is behind you.

Therefore you are looking roughly east. But we’re pretty sure you’re not.

1) My senses had correctly reported that the sun’s light was reflected, BUT what they failed to report was that it was a double reflection. The light was bouncing off the very tall building on my side of the street, then off the building opposite me. It appeared once more in the west, after two reflections. My poor brain could not cope with this conflicting ‘data’ and so I became disoriented. After a ‘restart’ I noticed the secondary reflection and all was well.

(If you look closely at the photo above, you should be able to spot the smaller windows of the first building reflected in the second.)

2) Another weaker level of confusion may have arisen because I saw the sun much lower in the sky than I expected to at that time of day (as a result of the double reflection). At this time of year I know to associate a sun near the horizon late in the day with the direction ”Northwest’ not ‘West’.

I did reach my destination, without any further ‘software faults’.