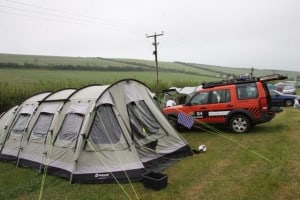 Each year we travel with 3 other families to the southwest coast of the Isle of Wight for some traditional British camping.

This is definitely not ‘glamping’. Neither is it wild camping. It is pitching a tent in a farmer’s field, releasing the kids to terrorise the hills and each other and then knuckling down to some serious rain-dodging and sleep deprivation.

This year appeared to be offering something very similar to previous years, but we were in for a little surprise. A little storm, in fact, that crept well east of where it was supposed to be. Naughty storm.

36 hours and 82mph winds later, 2 out of the 4 tents were totally flattened and things were getting cosy in the two tents left standing.

It is very rare that I mention kit by name, but I think it is warranted on this occasion. There were 3 brands of family tent among the 4 tents. After the storm had gone through, two looked as though they had been erected in the streets of Pamplona during the running of the bulls. Two tents looked almost as good as new; they were both Outwell tents.

Over the past 5 years, our Outwell tent has put up with a lot of kids’ attacks from within and without and has now withstood a tempest. I thought it fair to congratulate them publicly here.

If you’re looking for lightweight, expedition-style tents, then that is a whole different kettle of sleeping bags, but for family camping, they really are impressive. Well done, Outwell, great products.

(I have not received anything for this endorsement. It is just an honest reflection of my experience.)

On the subject of family camping, there is one other thing I’ll mention about equipment and general approach, in case it is of help to some in making decisions.

When trying anything new it is natural to want to sample before committing seriously. However, I would like to mention a trait that I’ve noticed in many almost-camping families. There is such a desire not to commit until they have worked out if they like it, that they go with poor kit. This isn’t true of those I have had the great pleasure to camp with, but many others I have spoken to over the years follow a similar pattern.

They’re not sure they’ll like it, so they either don’t buy a decent tent/cooking kit/sleeping bags etc. Or they borrow stuff.

This is not a bad idea if you’re fairly convinced it will be a one-off, but the problem is that it is quite an effective way of making it a ‘one-off’. Camping in a bad tent and struggling to stay warm, dry and content, will make a second camping holiday unlikely.

My advice is: decide if you’d like to be a camping family in a few years’ time first. If the answer is yes, go for it. Get advice from those in the know and invest whatever you can comfortably. It often ends up being an economical and fun decision. Even if the kids will be determined to make sure that you will still be exhausted at the end of each trip 🙂