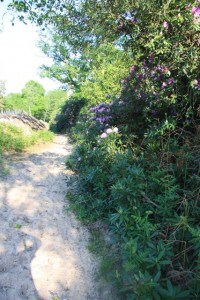 Navigation is about knowing where you are as much as working out how to get to where you want to be. A lot of the fun may lie in finding direction, but natural navigators also need to be tuned to the clues that help us to establish exactly where we are.

For thousands of years, humans gained an understanding of their latitude from the height of the sun and stars, but there are many clues beneath the sky. From general notions, the smell of the sea from land or the scent of a Caribbean island after crossing an ocean, there are much more specific clues. There are parts of the woods near me that I recognise from bluebell patterns and others from wild garlic signatures.

During a walk in West Sussex yesterday, I reached the end of the path in this photo and then crossed a quiet road. The land opened up around me and it became instantly obvious that I had entered a unique place. It was not my eyes or my nose that alerted me this time; suspicions were raised by my feet and then confirmed by my ears.

This is what I heard: The Sound of Summer.

Using the sounds in this recording and maybe a small clue in the photo above too (perhaps with a little help from Google!), can you pin down exactly where I was standing in West Sussex?

UPDATE… Look away now, if you don’t want to know the result… 🙂

In the recording we can hear a Field Cricket. Gryllus Campestris is an incredibly rare species and nearly died out altogether in this country. The last surviving colony was found in 1992 in a place called, Lord’s Piece, near Coates in West Sussex. At the time there were believed to be only 60 pairs that survived. After careful environmental management by the Barlavington Estate, the situation is much improved and Lord’s Piece is now able to offer breeding pairs to the Zoological Society of London.

Field Crickets that have been bred in captivity are being introduced to suitable places in West Sussex, Hampshire and Surrey, the entire historical range of this evocative insect. Gilbert White refers to this cricket, in his classic, ‘The Natural History and Antiquities of Selborne’ in 1789. At this time of year, on a warm sunny evening in particular, the male crickets attract mates with the song you can hear in the recording. But they remain a rare sound and hence a delightful and very unusual marker of both time and place.

The secondary weaker clue is in the abundant sand that can be seen lining the path in the first photo. Such quantities of sand are not commonplace in inland West Sussex so together with the sound of the Field Cricket, there are very few places where the two could be experienced simultaneously. Perhaps only one in fact.

This Site of Special Scientific Interest is home to two other unusual insects. The first is the Minotaur Beetle, which is named after the mythical creature that is half man and half bull.

The other is one of the largest insects in Britain, the fearsome hunter, the Hornet Robber Fly. The Fly feeds by pouncing on other insects and injecting them with a poison.

The Field Cricket likes dry sunny grasslands. It is no coincidence that I only heard the crickets after the land opened up around me. Sandy soils are dry and so the sounds and the sandy sensations underfoot are connected. But then, isn’t everything?