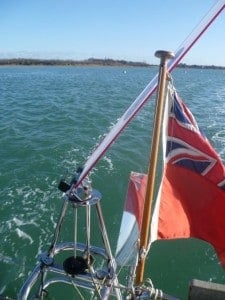 Although microchips have a childlike tendency to steal our attention away from almost anything else, I am not against technology itself. Once we have steeled ourselves to the risks of using any device, it is possible to have the best of all worlds: convenience, information, safety and awareness.

I think my favourite would be an unusual contraption, which on first inspection appears to defy the laws of physics. When I first came across this device I thought it must be the impossible fruit of some wire-haired professor. ‘Very nice idea,’ I thought, ‘Now please put it back alongside any other perpetual-motion machines that this crackpot has on their worktop.’

Long distance sailors have a great pedigree for inventiveness and it is a type of inventiveness that often works with nature. Not because such sailors are motivated to invent by a love of nature, but because of a practicality forced by a lack of resources. In the middle of a large ocean, electricity is a lot scarcer than wind, sun or water, of which there are, trust me, no shortage.

It is time for me to introduce the device that works beautifully and does not break any laws of physics. Ladies and Gentleman, I give you…

The Windvane Self -Steering Mechanism

Its beauty, you will already have surmised, lies not in its name. Its beauty, you will also be able to deduce from the photograph above, lies not so much in its looks either. No, this contraption is exquisitely beautiful, as beautiful as the word ‘exquisite’ itself, because of the way it works. If ingenuity were the measure of popularity, then every home would have one. But it’s not, so there are only a few thousand of these in the world.

Enough of the tattle, what is so special about this overgrown nutcracker, I hear you cry…

This strange contraption allows a sailor to hand over steering of a boat to a machine that has no engine and uses no electricity whatsoever. The windvane self-steering gear will steer a boat forever on a course relative to the wind, without any electrical power source or any input of any kind from the skipper. (I used one non-stop for weeks at a time when crossing the Atlantic.) All it needs is wind and water. But how does it manage this? I will now attempt to describe the workings of the machine in one sentence. And fail, but pick myself up and try again.

When the boat changes course relative to the wind, the windvane is blown over and this causes a rudder below the vane to twist; the water passing over the twisted rudder forces the rudder to one side and this powerful movement channels a strong force via a rope and pulley system to the tiller and steers the boat back on course.

The wonder, for me at least, is the way this machine finds the force to make big steering changes to a big heavy boat through heavy water, even when all it is sensing is light winds. With no electricity or combustion or anything except natural forces.

In case you are still a little bemused – I know I was – I will focus in on the real genius in the method. When the boat comes off course, the windvane (the large bit of floppy white and red plastic in the top picture) is blown over by the wind that it is no longer aligned with. This generates a small force, nowhere near enough to move a tiller, but enough to twist a rudder blade. The rudder in question is not the rudder that steers the boat, it is a small one that is an integral part of the mechanism and is just visible at the bottom of the picture below. The rudder blade underwater is now not aligned with the direction the boat is moving and so it is hit by the water that the boat is moving through, forcing the rudder to one side. This creates a much much bigger force, which is channelled via ropes and it is easily enough to pull the tiller to one side until all the forces are once more in equilibrium. At this point the windvane is upright once more and the rudder returns to a neutral position. Equilibrium is restored, until a few seconds later the windvane is gently blown over a bit and the process begins again, ad ingenious infinitum.

No technology is without its foibles, but this machine has a rather fun one.

One of the inescapable facts about windvane self-steering devices is that they have no idea which way they are going. They work by keeping a boat on a constant course, but only relative to the wind. If the wind changes direction, so will the boat, but its course will have remained constant relative to the wind. What this means is that in theory you could set one of these things to work and it could steer you in a circle if the winds happened to veer or back a full 360 degrees.

A friend and I enjoyed sailing using one on the Solent last Sunday and I was reminded of one of the rather nice consequences of the way this mechanism follows the wind. It turns the whole boat into a kind of windvane. We were enjoying a sail west across the whole Solent from Chichester to Lymington on a northwesterly Force 4. Occasionally the wind would strengthen a little and each time it did, it also veered round to closer to NNW. Since we were enjoying letting the windvane do the helming, each time one of these changes came through we would watch the bow swing round to the northwest as the boat accelerated. Although any half-decent sailor would pick these changes up just as quickly with their hands on the helm, there was no denying that this was a more visual demonstration of the fluctuating wind patterns.

If you’d like to know more, the windvane I have installed on my boat is fantastic and is called a Monitor windvane.