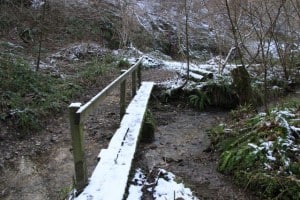 One of the most rewarding things about natural navigation is that it shuns any attempt by the seasons to quieten things down. There are many interests in the natural world that are closely shepherded by the seasons; foraging, birds and wild flowers will have their peaks and troughs, but some things are immune. Geology will reveal many of its fascinating faces regardless of whether it is February or August.

But natural navigation is a little different to all of the above, because it keeps its interest throughout the year, without too many troughs, and unlike geology it does it by constantly changing.

I’m often asked when is the best time of year for an outdoors natural navigation course and I can honestly answer that there isn’t one. Summer is pleasant for all the obvious reasons, but it is a poor time for stargazing. Midwinter can be bracing, but it is also possible to go for a three hour walk after lunch that includes sights of the planets and stars.

The recent snowfall has thrown a blanket over many of the clues on the ground that are so rewarding at other times of year. But, as ever, new ones appear for the aware navigator. I went for a short drive followed by a short walk on Friday. Below is a selection of the clues that revealed themselves in that brief window.

A Minute Expedition in Minus Two

Five minutes after setting off in the car I pulled into a small, icy car park in an area on the OS Map marked as Fryan’s Hanger. It offers fantastic views. I honestly did not know which clues to expect as I looked northwest past West Sussex villages, like Graffam. Something leapt out instantly. In the picture above, I’m sure you spotted the snow shadows pretty quickly. It is the asymmetry that is most interesting. There are green patches, bare of snow, beneath each of the trees, but not directly underneath. The green patches are off to one side, they are on the west-northwest side of each tree and this is a consistent pattern. This must have been caused by the snow being borne by a ESE wind, each tree has left a ‘snow shadow.’ In fact if you look closely below the branches of the evergreen on the left of the picture, you can see a pointy patch of snow which has sneaked under the branches of the tree and settled. Once noticed this pattern was consistent over miles.

I drove on, but barely two minutes later it was time for me to stop the car and take this picture, which emphatically shows the effect of sun’s uneven warming over the course of the day: In the picture above, we are of course, looking west.

It was time to begin the walk itself and I set out on the path that heads south-southeast away from the White Horse pub in Sutton. The next clue to reveal itself was found underfoot. In the book, I refer to the importance of using all the senses and give this exact example. Paths tend to be at a slightly different height to their surroundings, which means that any snow or ice on them will last a longer or shorter time. Either way they feel and sound different underfoot. During daytime this leads to beautiful patterns in open country, but at nighttime it can be of more practical value. There have been countless times when I have double-checked my course at night, because the sound of my footsteps has changed. As I returned from Muscat on Wednesday (more on that in another blog soon I hope), I had enjoyed spotting something  from the aircraft, which was now easy to enjoy close up. The snow that survives most determinedly can be found along the southern edges of field boundaries, especially strongly where trees offer some shade. The following picture needs little introduction, except to say, isn’t it pretty!: Likewise, I’m sure it took you only a couple of seconds to deduce from this picture that we are looking…? After my short walk it was time to head on home in the car. But the snow was not finished with me yet! On the way home my eye was drawn up towards Upwaltham Church. I parked and bounded up the snowy hill like an over-eager St Bernard puppy. To my surprise I met a photographer descending the hill, tripod and serious looking kit clutched in both hands.

‘I’m afraid you’ve missed it.’ He said. ‘I’ve been shivering up there for hours, but finally got it.’

‘Well done.’ I said, ‘But I’m after something a bit different.’ And I quickly explained the strange world of natural navigation clue-hunting to him and then went about snapping the following picture.

There are seven navigation clues in this picture and I’m going to use it as one of the fun competitions in my courses. It doesn’t matter the time of day, or year, you can’t ever really ‘miss it’.