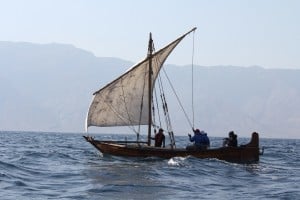 Following on from my last blog post about the windvane self-steering marvel, comes another wonderful piece of sailing technology. Although this one also works closely with nature, you will be delighted to read it is brilliant in its simplicity.

A couple of weeks ago I had the immense privilege of accompanying Eric Staples in Oman on a small voyage. Eric and his team restore historic Omani boats and build many from scratch. From fantastically detailed models, through small reed boats to great vessels, Eric brings back to life craft that might have feared their days had been ushered away. Many are now to be found on the water once more.

Two such vessels, named ‘zaruqas’, were used during the final leg of an ambitious expedition by young Omanis, under the auspices of a Outward Bound Oman. It was a great pleasure to see these young adventurers climb ashore from craft that represented their own heritage and to be congratulated by a minister from the Oman government.

After the awards ceremony, Eric offered me the opportunity to climb aboard and help him take a zaruqa back to its home port.

It was great fun as well as an extraordinary opportunity. We rowed most of the way as the winds were very light, but we did get the sails up for the final third of our short voyage.

The the next day Eric showed me around his workshop, a simple collection of temporary buildings on the shoreline with a large awning to offer shade to those working outdoors. There were many treats amongst the steam boxes, rhythmic sounds and inimitable smells of wood being worked. One of my favourites was a sample of a reed sail.

Before the days of choice, sails in this part of the world were often made from reeds woven together to form a mat. These sails are rare now, because of the labour involved and because the end product is heavier and less robust than many other materials. But the reed sail did have one advantage that no other modern materials that I am aware of can emulate.

Reed sails auto-reefed. (For non-sailors, reefing is the process of reducing the amount of sail you have up as the winds strengthen. It is sometimes a flustered business as you don’t tend to reduce sail when conditions are perfect.) If you look at two photos below you can see a small sample of the reed sail, which Eric allowed me to smuggle back to share with you.

In the first picture the reeds are under no tension and are tightly packed together. In the second picture I have (or I should say my ‘would-be willing assistant – if it hadn’t been as she was trying to get the kids in the car for the school run’, Mrs G has) simulated strong winds by pulling at the reeds. Notice how the reeds open up, lots of tiny holes appear. This meant that as the winds grew in strength, the sails allowed more wind to escape, an ingenious method of automatic reefing!