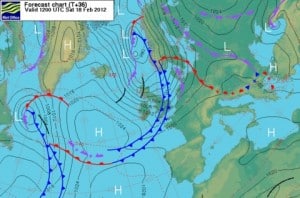 A cold front is the leading edge of a mass of cold air as it displaces a warmer mass of air at ground level.

Cold air is denser than hot air (hot air balloons rise) and so as a cold front advances it slides under the warmer air forcing it up. As the warm air is forced up its moisture condenses. This movement of moist air upwards is often quite dramatic and this can lead to bad weather: heavy downpours, often thunderstorms.

This brief band of very unsettled weather and high winds is typically followed by three things. There will be a shift in wind direction, often from a wind from the southwest to one from the northwest. There will also be a drop in temperature and a big improvement in visibility, often very clear air and skies.

The image above shows the predicted positon of the double cold front as it passes over the UK at midday on Saturday. (Cold fronts are always shown as blue lines with blue triangles.)

A front has just passed through, Venus, Jupiter and the stars are all beaming brightly in the clear air. It all happened in good old ‘textbook cold front’ style. But don’t take my word for it, have a look at these graphs of wind direction, wind speed and air temperature over the past 12 hours: