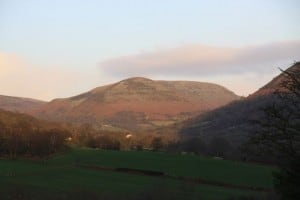 I do not share everything in this blog, you will be pleased to know. Most matters familial and ablutionary are kept from these pages.

So too are exact locations from time to time. It is not usually necessary to pinpoint the precise spot where a natural navigation technique revealed itself, or to give a 16 figure grid reference of the perch from which a photograph was taken.

Sometimes, I must confess that I deliberately fail, as unostentatiously as possible, to reveal even a general location if I am keen not to encourage visitors for any reason. This is rare, but it does happen. I have walked on certain routes in the Lake District and felt guilty for having let my boots join the millions of others that etch too deeply into these rocks at times. The guilt would worsen if I then added in any way to the numbers who walked the exact same path.

On occasion a place I find is magical because of its remote, untouched nature. Then I feel conflicted. I try very hard to make sure that there is genuine value in my blog, that it reveals not just natural navigation observations and techniques, but also shares wherever possible the broader joys of the outdoors and where these are to be found.

I have just returned from a short family break in the Vale of Ewyas in the Black Mountains. However aware I am that we were not the first to visit or discover this corner of the Brecon Beacons National Park, shock may not have registered on my face if a shepherd had appeared from behind a rocky outcrop and announced that we were the first to visit the valley in a hundred years.

This is a place that has been carelessly and wonderfully overlooked by modernity. As if to add a piquancy to the natural wonders of the Llanthony Valley as it is also known, mobile telephone signals have failed to penetrate the land. Not even TV signals can bulldoze their way through the high rock fortresses on either side.

The place has drawn monastics, writers, artists, recluses and rebels of every flavour for centuries. And in fitting testimony to the wildness of this place, it spits them all out again. Even those who, like the designer Eric Gill, came to get away from  ‘men of business’ find that it is altogether too remote and run back to milder wilderness, their reclusive tails tucked between their legs. The few that stay are eccentric, and if not tinged with madness when they moved there, then they guard against its onset for sure.

A thin and at times testing road runs up through the village of Llanthony, with its 12th Century Priory, heading northwest towards the town of books, Hay-on-Wye. Either side of this tarmac that has a weak grip on the green, is a valley that sighs in the face of anyone who dares bring the slightest urbanity with them. It is a place that challenges, a place that inspires. Bruce Chatwin was a convert and based his novel, On the Black Hill, here. If you have ever wrestled with writing poetry, if you have ever stared within and asked if you are truly a poet and been tortured by that simple question, then this is the place to head. You will know shortly after arriving and be able to answer the question with authority by dusk.

If you are more content to sense than create and you go seeking natural wonders, you will soon find it is impossible to take a big enough mental basket. It will overflow with observations before you have actively sought any.

Natural navigators will find the valley teeming with clues. In the dawn photograph above we are looking northwest. This perspective gives us a chance to appreciate one of the most beautiful clues, albeit one that is sketched out with one of nature’s broader brushes.

Natural navigation is dominated by an interest in finding direction, it is both the amuse-bouche and sirloin steak of the subject, but there are many navigational delights that do not concern themselves with compass points.

We can garner an understanding of our altitude from the life we find around us.

In the view above we get a chance to witness how the plant life changes with altitude. Deciduous woodland in the valley bottom surrenders to hardier pines. At the treeline the pines give way to the rust of winter’s bracken. Looking higher still only the hardiest of plants, lead by the grasses, will be found. The plants themselves shrink as the rock of the mountain forces its way higher into the more violent winds and more determined snows.

These are the clues to our height that are easiest to take in from a distance before we head up the hills themselves and risk failing to see the wood for the trees.

There was a temptation for me to fail to mention the Vale of Ewyas at all. There are many who would prefer me not to whisper its secrets. However, three things made me happy to share it. They are all related.

Some places are stronger than us folk. The Vale of Ewyas I hope and believe is one of them. If it is not and it ever needs help in its defence, then its chances are better if at least a few have fresh memories of it. Finally, this is a blog and blogs that fail to let slip the odd secret are not worth their electronic ink!

This is the best wild place I’ve ever been to that is relatively easy to get to.

The rather poor and poorly-focused photograph below was taken a couple of days before the one above. Notice how there is still a tiny and thin band of snow high on the northeastern side of the distant mountain, but none elsewhere. Such places are teeming with clues.