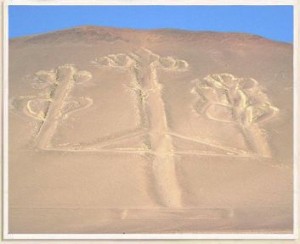 Last night I caught a few minutes of a programme on BBC4, called ‘Unnatural Histories.’

As so often seems to be the case, a short stroll from the mainstream channels uncovered rough diamonds.

In the programme, an aerial shot showed us clearly visible patterns in the earth, patterns that were partly concealed at ground level by dense undergrowth. The narrator explained that we were looking at ‘geoglyphs’ in the Amazon rainforest. Geoglyphs are shapes that have been deliberately formed in the land by the hand of man.

Like many pilots, I have come to love the way it is possible in the air to spot patterns in the earth that are hard to notice on the ground. Lines that are lost in their surroundings on terra firma, stand out luminously from 3000 feet. But my experience has been restricted to European Iron Age Hill Forts and the like. This was definitely new territory.

In the Amazon there are ‘negative’ geoglyphs, formed by digging ditches, often up to 4m deep – ‘negative’ only in the sense that something has been removed. In other parts to the world there are positive geoglyphs where shapes are formed by building up from the ground, using stones or similar.

You can imagine that my ears pricked more than a little when the anthropologist being interviewed, explained that the hundreds of shapes they had found in the Amazon were mostly aligned north-south. A little light digging of my own revealed this to be a far-from isolated example, many of the worlds geoglyphs are aligned with the cardinal points.

This is definitely not coincidental. The most likely explanation for geoglyphs, even when the exact explanation is elusive – as in the Amazon, is that there is a religious/spiritual explanation for these mammoth land sculptures. Once more there is the temptation to ask the question: “How did these old and technologically-basic civilisations manage to create architecture on near-perfect north-south lines.” This question is quite natural, but it is to misunderstand one important part of the ancient world: the sky.

Historically, most divine worship has looked upwards and outwards at least a little. The sky forms part of many ancient cultures’ creeds. From here it is simply a case of realising that the way the sky appears to behave and the directions we know as north, south, east and west and just two sides of the same coin. Anyone who spends time admiring the patterns in the day and night sky will come to know north, south, east and west, even if they use different words, because these are labels for the changes we see in the sky. East and west are the average directions of sunrise and sunset, wherever you are in the world, and north and south are the anchors of the night sky – the only two places where the stars cease their restlestness, the world over.

In the picture above we are looking at a geoglyph called the Paracas Candalabra in Chile. It is aligned almost perfectly north-south and can be seen from miles out to sea. There are a few more very good examples of geoglyphs here.

I cover the idea above from a similar angle in my book, The Natural Navigator:

“There is sometimes a temptation to think that this is all a remarkable coincidence: how extraordinary that the sun should happen to sit neatly on certain lines, like north or south, at certain times, or that it should happen to rise exactly east or set west at others. It is, however, a false temptation, because the cardinal directions and the motion of celestial objects, including the sun, are just different ways of looking at the same thing…”

The astronomical explanations for all of the above can be found in the simple, and yet rich and revealing, revolution of the Earth on its axis and its orbit around the sun. Geoglpyhs are aligned with respect to the axis of the Earth’s rotation. Not because its architects were aware of such a motion, but because the sky betrays it.