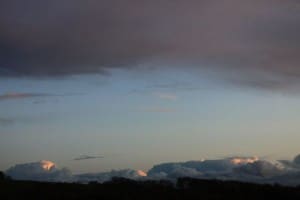 Happy Winter Solstice One and All!

Here’s an interesting solstice fact for you: the Earth is actually receiving more solar radiation at this time of year than at any other time. This is because the Earth does not orbit the sun in a circle, but in an ellipse. In the northern hemisphere winter the Earth is at its closest to the sun, a point called ‘perihelion’, but in summer it is at its furthest point, or ‘aphelion’.

The Guardian have published a little article on the timing of the winter solstice.

However, my favourite solstice image is on a different page. The same technique used in the photo on that page, from the same position, but on the summer solstice would probably not catch the sun at all, or perhaps just a glimpse of it in the top corners.

At the start of end of the day the sun will often hide behind clouds, buildings, woodland etc. Even in the middle of the day it will still be a full 47 degrees lower in the sky than in late June. That is to say you could fit almost five outstretched fists between the two solstice suns at midday, one on top of the other.

The fact that the sun is lower and there are more clouds in winter make it a good idea to remain aware of a simple technique. It is the sort of thing that when you think about it, it seems ridiculously obvious, yet it is easy to not consider it at all.

Clouds can act as a mirror, much in the way the moon does, and reveal the approximate direction of the sun. In the image above, which I took a few days ago, the sun has long since abandoned the surrounding land. It would be all too easy to imagine that it was lost as a source of direction-finding altogether. However, if you look at the clouds they are pointing the general direction of the sun for us, it is to the right of the picture. Since this was taken in the afternoon, the sun will be in the southwestern part of the sky and so we must be looking in a southerly direction.

If you are lucky you can find clouds in more than one direction that are lit on one side, sometimes a collection of mirrors forms that allow you to pinpoint the sun fairly accurately, despite the fact you cannot see it. (This is a technique I often find myself using on aircraft, if I am keen to work out the direction the aircraft is heading, but only have a perspective that does not include the sun).

There is one other aspect to this technique that makes it a favourite in winter. We get more unsettled weather in the winter months and the accompanying tall clouds. Bad weather is often preceded by towering cumuli and arrives with cumulonimbi, these giants can block out the sun, but they do occasionally hint at its whereabouts too.

The example above is obviously at the simplest end of the spectrum, sometimes it is much trickier – and can be more fun, if the pieces of the jigsaw fit! Which reminds me, it is nearly time for me click into Christmas mode.

I shall doubtless shortly be encouraged to help with some ludicrous jigsaw puzzle of the cardboard variety. But I shall seek my revenge by dragging everyone’s turkey-swollen bodies outside to do a cloud and sun jigsaw puzzle afterwards.