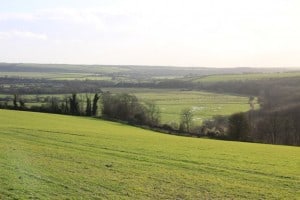 I was interviewed by Susan Gray on behalf of the Ramblers yesterday. We chatted over tea, blasts of icy December air and then some more tea. Did you know that the amount of tea walkers drink is inversely-proportional to the number of days we are from the winter solstice?

We only went for a short walk, it was more of an indoor interview than a walking one, but we were outdoors just long enough to appreciate the difference a couple of hundred feet of altitude can make. In the valleys it was far from balmy, but it was a pleasant temperature that did not draw attention to itself. On the tops of the South Downs, there was grimacing aplenty and the sandwiches we had planned to eat en route stayed in the rucksacks to be taken back down to the village of Houghton Bridge, whence they had come. The interview will appear in an issue of the Rambler’s ‘Walk’ magazine in spring 2012.

In other news… Well, if not news exactly, at least some prattling on about what I’ve been up to…

Over the past week I have bounced between London, courses in Sussex, nearly getting burned alive and getting very wet.

I spent Wednesday morning in the studios of ON FM. Joasia Tapson is a friend who hosts the wonderfully named, ‘Plasticine, Candles and Soup‘, slot on On Fm. Live local radio hosted by a friend is the perfect mix of a relaxing way to spend a morning… tinged with a vague awareness that it is still possible to say something really daft and impossible to retract.

Wednesday night was spent at Sceptre’s 25th Birthday bash at the Cavendish Club. There was a lot of book industry chat and networking going on, most of which was a foreign tongue to me. But there was also a touching moment when a magazine editor came up to me, introduced herself and said, ‘I bought your book for my Dad and he loved it!’ It really was a special moment, because I’d just spent an hour hearing grumbles about royalties from all sides and authors being referred to as ‘content-providers’ and similar. Still, mustn’t grumble myself, it was a great privilege to there. Happy Birthday, Sceptre, you’re the best!

Thursday could not have been much more different to the champagne flute surroundings of the Cavendish Club. A team from the MOD’s tri-service ‘The Defence Survival, Evasion, Resistance, Extraction (SERE) Training Organisation (DSTO)’ drove up from St Mawgan to spend a day on a course with me in West Sussex. It was a great privilege to run a course for a group that included military survival experts, military pilots and special forces soldiers.

On Friday I went for a cycle with a different type of elite unit, writers and photographers from Cycling Active magazine. It was fun, although it would be remiss of me not to point out, as I did to them several times on the day, that I am a **** awful cyclist.

On the weekend my wife and I kept to our tradition of celebrating our wedding anniversary by going for a sail. We headed over to Cowes on the Isle of Wight on Saturday afternoon. As the temperature on the boat headed confidently down towards zero degrees, the original plan of fine cuisine in Cowes was replaced by nipping into the local tandoori for something bigger and hotter, in both senses, to fuel us through a cold night on the boat.

We were moored against a wall and the swell from passing boats met swell reflecting from the wall, throwing the boat around like a toy at times. (It was of little consolation to my wife that this interference between incoming and reflected swell is the same as that used by Pacific Island navigators to detect the proximity of an island downwind!).

We did have a small heater on the boat, but one particularly vicious wave threw the heater across the saloon. The clatter of it landing was followed by my wife shouting, ‘Fire! Fire!’. The impact had detached some plastic inside the heater, which had come to rest on the hot element inside. Foul-smelling smoke began to fill the cabin, but there were no flames fortunately. I spent the following hour dismantling the heater and repairing it. It was a race to get it fixed before the frost began to form around us.

The drama of the heater was exceeded by the elements the following morning. The wind began at a Force 3, then grew to Force 4, then 5, before skipping Force 6 and going up to a Force 7 and staying there. The wind was not a problem, it was the sea conditions to the east of the Isle of Wight that were the challenge and I would not have wanted us to be in any other boat than my tried and tested Contessa 32, Golden Eye. Sophie’s face was quite a picture. It was that classic skipper’s challenge of remaining cool and calm as the workload steadily mounts. Remaining cool was made easier as I took a chilling wave down the back of the neck as I crawled to the mast to put another reef in the mainsail.

I know what you’re thinking… Not much chance of my marriage lasting to another wedding anniversary!