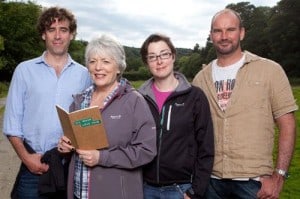 A huge thank you to everyone for all the messages that have been coming in about All Roads Lead Home. I thought it was time that I added a bit more information about the series.

Below is a blog I wrote for the BBC website, which went out just before the programme on Wednesday.

I also wrote a piece for the BBC News Online Magazine, about 6 unusual methods for keeping your bearings whilst in a town. As soon as it went out, it went nuts. More than 300 people left comments before comments were switched off. Here is a feedback email from the BBC:

Here is the page with those methods: Urban Natural Navigation.

The article as it appeared on the BBC website is here.

Teaching my celebrity students the art of natural navigation

A little over three years ago I set up a school to teach the rare art of natural navigation. Since then I have run courses, indoors and out, teaching hundreds of people how to find their way using only the sun, stars, moon, plants, animals, weather and buildings.

When my book on the subject came out I was surprised and delighted to learn that there were not just a few hundred, but tens of thousands of people interested in finding their way using nature. It was then that the BBC got in touch and asked whether there might be a way to introduce millions more to this very unusual world. It took quite a while to come up with the right idea for a series, but it was very exciting when we settled on a plan and could begin the huge challenge of bringing natural navigation to the screen.

The plan was for me to teach Alison Steadman, Stephen Mangan and Sue Perkins the basics of natural navigation and then send them on three journeys together. For each journey I would write a short guide, prompting them to look for certain clues along the way to the next place they would be visiting. We realized that this was a great way for the viewer at home to learn how you navigate naturally, whilst also getting to have a laugh at the fact that this is not always an exact science.

Setting up any natural navigation challenge is always a bit of a Goldilocks problem: the routes must not be too easy or too difficult. It is tough to get it right, even when it is not going to be seen by the nation. For All Roads Lead Home we tried really hard to mix the right level of challenge with areas that would be fascinating for the actors and therefore the viewers. It meant that more than two-thirds of the routes we considered never made it to the filming days.

The producer, Zoe Timmers, and I travelled to the areas that had been chosen by the actors to prepare the routes. I was focusing on the natural navigation clues and challenges, whilst Zoe was thinking logistics and smoking out contributors. We met some truly extraordinary individuals, from a ranger in a peat bog to witches in stone circles.

Alison, Stephen and Sue would travel to Cornwall first, then Ireland and finally Wales and Liverpool. I knew that we would have to make the challenges get steadily harder from a gentle start, but nature does not always follow the same agenda. In some places there were good clues everywhere when I wanted few and in Ireland and Wales there were many misty moments when I found it very challenging myself and feared for the prospects of my students.

The first two days of filming were the training days. It was time for me to teach Alison, Stephen and Sue the wonderful art of natural navigation. We met on day one at West Dean College, near Chichester.

I didn’t think anyone else would feel this, but for me there was a real sense of first day at a new school, which was a bit ironic as I was the teacher.  It was a morning of meeting new people, trying to do what the headmaster, I mean director, Andrew tells you to do, without looking a fool in front of everyone else. I think we were all doing our best to be as kind to each other as possible, whilst wondering, ‘Is this going OK? This is OK isn’t it? It’s not going to be a… disaster, is it?’ I didn’t learn until later that first day, that for Alison and Stephen, this was a new experience too. Although they are of course hugely experienced in TV, they told me they had never done an unscripted outdoor series like this before. Added to all this, nobody had ever tried to make a series about natural navigation before, let alone release three people into the wild during it. I remember Alison saying on the first morning that she was daunted by the challenge and I replied, ‘Don’t worry, you’ll be fine. Besides, if this is scary for you, then it is absolutely terrifying for me!’

The challenge of getting three people confident enough to navigate naturally on their own in two days is big enough, without any cameras. If something takes five minutes without cameras it has the potential to take an hour or more with them. Added to this we had some bad luck with the weather. Improvisation was called for, cardboard models of the moon were thrown to one side as they grew soggy in the rain and I ended up using a piece of chalk to sketch the moon on a stone floor under the shelter of the porch of West Dean College.

We had a lot of fun, largely due to the patience and good humour of all involved. The director, Andrew, the producer, Zoe, myself and all the crew did our best to adapt to the unknown and Alison, Stephen and Sue did what they could not help doing, they made us laugh, a lot. (I learned that it is quite easy to tell when it’s time for entertainers to take on another challenge: they start spontaneously breaking into song and dance.)

At the end of two very full days it was time for me to release my students to their own journeys. Their first steps without help would be taken down in Cornwall. The whole point of reality TV is that you can’t be sure what will happen, but that didn’t make this series any more relaxing for anyone involved! I think we all worried: Would they find it impossible? Would they find it too easy? Would they all have tantrums when stuck on Bodmin Moor for hours with no prospect of escape except the memory of me explaining something once a few weeks ago?

If the first training morning had felt like going to a new school, then the end of day two felt like dropping Alison, Stephen and Sue at the gates and waving goodbye. No tears now, be brave. It had been an experience unlike anything I have ever done before.