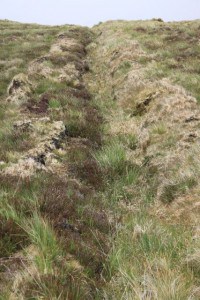 After an intense week of scouting in northwest Ireland with the BBC last week, I felt a little weary come Saturday morning. We had covered almost all of the largest island of the coast of Ireland, Achill Island in County Mayo, and then zoomed about Ballycroy and a few other places too. A couple of days mucking about would have been nice, but instead I had to get the first draft of my new book to my publisher’s by this morning. Tomorrow I’m off to Cornwall with Zoe Timmers from the Beeb again. One of those busy times, but all the small discoveries make the hecticness worthwhile.

In this picture we are looking east in Ballycroy National Park. Notice how the two sides of this drainage ditch look very different. The darker left side of the ditch, that is the south-facing northern side, is covered in a thick mat of heather, whereas there is little or none growing on the opposite bank. Heather dislikes shady spots and so can be a good indicator of south-facing inclines in northern latitudes.

Assymetry, my friends, that is the name of the natural navigation business!