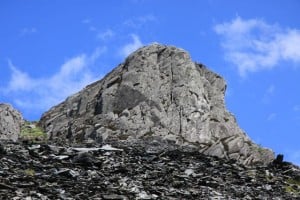 I am spending a lot of time at the moment helping the BBC with a new series and have spent the last few days in North Wales.

When I was told that we were going down a slate mine in Snowdonia and that it would be great if there were some natural navigation clues to help us find our way in the mine, I was initially a bit concerned. Natural navigation methods can be used in a very wide variety of locations, including underwater, but I have not spent any serious time caving or in mines and so feared it might be a non-starter. It quickly became clear that I was wrong and that there is not only a method that works, but one that is beautifully simple and almost foolproof.

As is so often the case, the clue had been if not under my nose, then at least above it for years, but I just did not think to look for it.

I have used the angle of the rock above ground, that is the angle that rock strata have been tilted by geological forces, many times. In the first picture you can see the rock layers, that would once have been horizontal, are now tilted from low to high as you look from left to right. Once you have tuned into the fact that the rock strata are tilted up at the southern end, it will prove a brilliant compass over wide areas of ground. Excitingly, it quickly proved to be an even better one underground.

After half an hour of exploring one of the largest slate mines in the world, descending two levels and taking many twists and turns, it was still incredibly straightforward to find the grain of the rock, look in the direction of the upwards incline and point south. Unbelievably it was easier to find direction underground than above it! In the photo of the slate wall we are looking east.