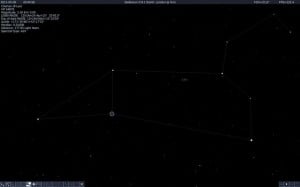 In the northern hemisphere Polaris, the North Star, tends to get all the attention when it comes to finding direction using the stars. There is a good reason for this: it is easy to find and is very accurate. In the southern hemisphere the Southern Cross is used to find south and Polaris is not visible. But what about finding south in the northern hemisphere? The easiest thing is still to find Polaris and then look in the opposite direction, but what if we want a method that actually shows us south itself. Here is a nice simple and very unusual method that I invented a few years ago, which you can try this evening.

In the first image, Chertan is the star that has been ringed, and Zosma is the one directly above it. When Zosma appears directly above Chertan, as in this picture, you must be looking due South. Have a look as soon as the stars come out tonight.

That is a nice, quick and simple method for using Leo to find south, but it does have one big drawback: it only works at certain times. I have devised a more advanced method for using Leo to find south that will work at any time and from anywhere that you can see Leo, but be warned this is a bit beyond beginner’s level so only read on if you are an experienced stargazer already or if you are up for a challenge!

We need the same two stars as before, Chertan and Zosma. Next what we do is extend a line from Zosma down to Chertan and keep it going until it hits the ground. If this is a vertical line, then, as we saw earlier, this will be due south. But most of the time these stars won’t form a perfect vertical line (they will wheel across the sky like the hand of a clock) and so what we need to do is continue their line to a point underground. The point underground needs to be the same angle below the horizon as your latitude. On the south coast of England my latitude is 50 degrees north and so I am interested in a point that is 50 degrees, (five extended fist widths) underground.

Wherever the extended line from Chertan and Zosma gets to this depth will be due south. All you need to do is find the point on your horizon that is vertically above this underground point and that will be due south.

Since you can find direction using Polaris in many more straightforward ways, this method is really just for fun, unless you are very unlucky and Leo is the only constellation that has not been obscured by cloud.

Why this method works: