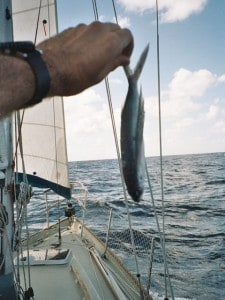 I’m doing some research at the moment and came across this line, written by the German explorer Alexander von Humboldt, about flying fish:

‘Like swallows they shoot forward in thousands in straight lines, always against the waves.’

I’ve seen a fair few flying fish in my time, even been hit by a few. I’ve also come across this idea that they always fly in a set direction relative to the waves a couple of times before, but I’ve yet to work out whether this is true or not. If so it could offer some interesting navigational pointers for times when the wave direction is hard to gauge. Anyone able to shed any further light on this?

The flying fish in this picture is one that hit me in the face in the night when crossing the Atlantic singlehanded. It gave me one hell of a shock, but lost the fight in the end as I couldn’t find it to sling it back over until it was light again the following morning. On some mornings there were half a dozen on the foredeck, even found a squid there once too. It would be hard to starve out there if you tried.