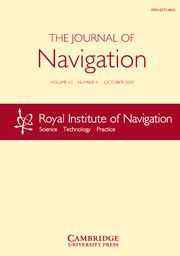 There are many things I like to claim that natural navigation is: fascinating, challenging, eclectic, addictive, unusual, diverse and diverting, but not… cutting edge.

Some of the discoveries I, and those who have come on my courses, make are, I hope, in their own small way pioneering, but they certainly do not represent the front of mainstream navigation research.

Most people are now at least vaguely familiar with some of the technology that has filtered down to consumer level and which sticks itself to our windscreens and palms in the form of TomToms and the like, but there is a whole world of navigation technology that lies, quite well hidden, behind these proliferating gadgets.

To give a taste of this world, I have listed the titles of some of the papers published in the latest issue of ‘The Journal of Navigation‘, which sits politely and smells nicely on my desk as I type. This is a world that is as strange as that of natural navigation, although I will leave it for others to judge whether it offers the same romance.

You get the picture…

Some of the above even makes vague sense to me, which is a relief, as a professional navigator!