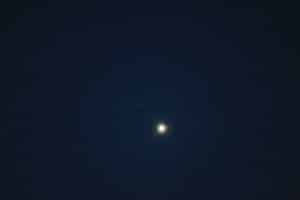 I hesitated before posting this. Working in a slightly unusual field I do have to guard against publishing anything that could be deemed ‘unreliable’.

And, no, I must emphasise that it is not anywhere near April 1st, before continuing…

I would genuinely like the help of a photographer, astronomer or ufologist to try and solve a mystery.

This morning I was taking some photographs of Venus, when I noticed what appeared to be a small white smudge near the planet itself.

In the first picture (viewed on the LCD panel on the back of my camera) I noted it and thought it must have been refraction or some other light/lens phenomenon.

When the next photo showed the same ‘smudge’ to have moved slightly it was a little intriguing. When subsequent photos showed it to be moving steadily I became convinced that it was not an effect but an object of some kind. An aircraft was the most likely candidate, but I am fairly confident that it was not an aircraft as nothing was visible with the naked eye and my eyesight is good. I am very experienced at looking at aircraft at altitude and although the speed across the sky was consistent with this, it should have been visible with the naked eye. It would have been the highest altitude aircraft I have ever come across.

The puzzle deepened when exactly the same phenomenon repeated shortly afterwards. Was this a meteor shower? The Geminids? It seemed too slow to be a meteor, taking a full minute to pass through the field of view…

Now, I am certain there is a mundane explanation for this, but I do not have it and would be extremely grateful for it. I was puzzled enough to take at least a dozen photos in fairly short succession. The smudge can be made out above and just to the left of Venus in the first picture, and further to the left in the second one.

Please get in touch with any suggestions or questions.

The pictures were taken using a Canon EOS50D and Sigma 150 – 500 lens. The focus is far from good as autofocus was not possible and I am bad at focusing on planets manually. Basically I am not a great photographer!

I can be contacted via email. Hi Tristan,
I ordered your excellent book from amazon, and it arrived today. I was just flicking through the pages and came across the section about the “Star Dust” aircraft which crashed. You mention a UFO in relation to this event in the text, and for some reason i felt compelled to access your website!
What do I find on the first page, but an article about Venus and a UFO!
Being interested in this areas for many years, I thought I would do what I can (if anything) to try and help. I’m sure that you are aware that your camera pictures contain EXIF data, which tells the exposure length, aperture, date/time etc.
I can see the following from your EXIF data (cut out bits we don’t need).

At the times from your two pictures, you are obviously facing venus which is about SSE. The geminds radiant at that time is over the star castor in the gemini constellation, which is directly to your west (a bit far over I think for them to be a candidate), and besides as you mention in your article the “object” you spotted was to slow to be a meteor, as these pass really quickly in the blink of an eye over the sky.
What ever your object is, it moved quite a distance in the 35 seconds duration from picture 1 to picture 2. I superimposed picture 1 over picture 2, using venus as the anchor point. So venus from picture 1, is directly placed on venus in picture 2.
http://s332.photobucket.com/albums/m333/pongobucket/?action=view&current=movement.jpg
I thought maybe a satellite would be in that area at your camera time, but as you can see from the screen shot in stellarium, nothing is visible (at least in that programs database).
http://s332.photobucket.com/albums/m333/pongobucket/?action=view&current=viewing-time.jpg
I thought maybe it was a comet?
http://www.heavens-above.com/comet.aspx?cid=P%2F2010%20V1&lat=0&lng=0&loc=Unspecified&alt=0&tz=CET
This one is quite near to venus, but as I have not got tracking software – im not sure where it would have been on your date.
Anyway, I doubt I was any help – but thanks for writing a great book, and keep your eyes on the skys!
Cheers!
Doug.
______________
UPDATE 8.05AM 16/12/10
Tristan,
I spent about 25 years of my working life as a news photographer, retreating to the world of IT support at the newspaper where I work about 15 years ago.
My guess about your photo puzzle is that the ‘smudge’ is simple lens flair, and a very common type that can appear when a point source of light is photographed against a dark background, especially through today’s complex, multi-element zoom lenses. The fact that you say you saw nothing in the sky with your eyes but only in the camera image is the first thing that suggested lens flare to me.
The second is that the smudge changed position relative to the light source (the planet). Flare of this type usually is superimposed directly on the source if the source is positioned exactly in the center of the frame (on the lens’ optical axis), but moves away from the light source as the light source moves off axis.
Is it possible the camera was fixed on a tripod and the planet was moving across the field of view over the period of a few minutes?
Another common cause of such anomalies is dirt, dust, or water droplets on the surfaces of the lens (either front, back, or, sometimes, within the lens itself.
Again, this is hardly an informed opinion, but a wayward guess from someone who’s spent some time peering through camera lenses.
Another possibility is that you’ve discovered a new galaxy and, as a result of a freak quirk of happenstance, will find more fame than a lifetime of hard work and skillful writing has otherwise brought you.
If you’re desperate enough to quote any of this drivel in your blog, please attribute it to ‘O Docker’, or, better still, to ‘a highly suspect source’, as I’m in enough trouble with my employers as it is.
– ***** **** (O Docker)
—————
Hi O Docker,

Thanks for your email and I think it is a strong candidate as an explanation, it would certainly be the only thing that could rationally explain why the phenomenon was repeated shortly afterwards. Only nagging doubt I would have is that the object was moving with some noticeable speed across the field of view, but Venus’ movement was barely detectable over such a short space of time – a minute.

That said, at this stage, I would put your theory down as the explanation that I would bet on if I had to.