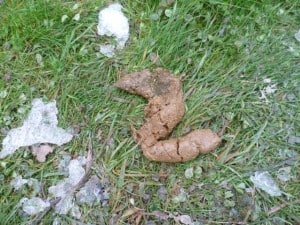 One of the natural navigation techniques that ocean sailors have used for centuries is noticing that the incidence of flotsam and jetsam increases, on average, as you get closer to land.

A similar principle can be used on land to find towns or villages. The number of roads, paths, power lines and communication cables increases as you get nearer a town; of course light and noise pollution also increase. There are some more ‘lateral’ clues too.

On the weekend I was walking with friends in the South Downs. My friend had the map and so I did not know exactly how far we were from our lunch stop, the George and Dragon pub in the West Sussex village of Burpham. We had been walking for about 9 miles, in deep snow and along slushy paths. We were hungry, which can help sharpen the senses.

I knew that we were within half a mile of the village when the incidences of dog mess sky-rocketed along the sides of our path. Dog-walkers are habitual and have their rituals. The path we were following into the village was clearly a favourite short walk for the dog-owning villagers. There were at least one hundred poops in the space of four hundred metres. Disgusting, yes, but in a strange way a welcome navigational sight. Lunch could not be more than 15 minutes away!