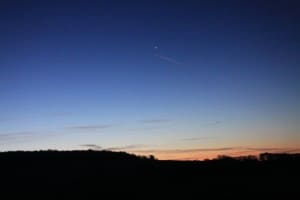 The frost crunched under the Ugg boots this morning and the cold crept in under the ridiculous hat as I helped myself to views of the waning moon, Sirius and Venus. In this picture Venus can be seen just above the contrail.

You may also just be able to see a star to the right of Venus and slightly higher. This is Spica in the constellation Virgo. Minutes after this picture was taken Spica had disappeared from view, drowned in the dawn’s growing light. Venus would not be bullied so easily from the sky and remained beacon bright. This is one of the easiest ways of telling that you are looking at a planet, they are usually the first to arrive and the last to leave the night party.

Saturn was visible earlier on, higher in the eastern sky than Venus or Spica, but is far from its brightest at the moment. It is at the party, but leaning against the wall and sipping on a drink, moodily.