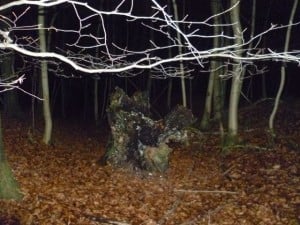 Last night the conditions felt right for a walk in the woods. There were plenty of clouds, but large gaps suggested that the stars would not hide for long periods. The moon would not be getting up until later and the breeze was too light to be of help. I needed the stars.

I set off as the last light from the sun faded in the southwest. Cassiopeia and Cygnus neatly sketched out north for me, even when Polaris was well hidden. When moving south I used Jupiter and Aquila.

Four hours later I returned, having spent nearly all of it alone, in beech woodland and without using a torch. Moving at times with my left hand extended out to fend off inquisitive lower branches, I covered about six miles; this was no race.

In every woodland walk there are times when you feel the forest is on your side and times when it is inviting you to make haste the exit. When the sun has gone down, the trees never lose their ability to thrill and scare.

The only light I used all night was the single flash from my camera to catch my nemesis. I closed and shielded my eyes, to protect my night vision, and then pointed the camera and ‘shot blind’. This picture, which I did not look at until reaching the end of my walk, must have been of some ogre, a menacing hunched figure, one who crouched silently by the path of those who were foolish to walk alone at night in the woods. Turns out it was a tree stump.

Or perhaps it only turned into a tree stump when my camera came out? Heisenberg wrote of stranger things and called them physics.