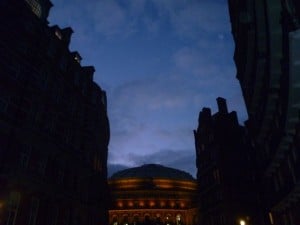 Nearly all navigation is an attempt to join landmarks together. Even those on boats crossing oceans are probably hoping to find a landmark they recognise as the final part of their journey.

The word, ‘landmark’, simply means something that makes a location recognisable. It is deliberately vague as it can apply to anything, a landmark may be extraordinary – the statue of Christ the Redeemer towering over Rio de Janeiro’s from Corcovado mountain. Or it may be mundane – a red postbox at the edge of a village.

A landmark does not need to be grand, it does not even need to be recognised by others, just so long as it is recognised by you. Like other key parts of the navigation puzzle, landmarks are so critical to us that they weave their way into popular culture. The pirates in childrens’ stories bury their treasure and retrieve it using maps, but the maps nearly always guide them through a series of landmarks: past the hull of the shipwreck, behind the tree with a skeleton propped up against it…

From a walk in the a garden, to following the peaks of the Pyrenees, land journeys of all scales can be seen as a threaded line of landmarks, each one recognised and then registered. If you phone someone and ask them for directions to their home, and if they don’t palm you off with a postcode, then they are highly likely to reel off a series of landmarks:

‘Go past the bus-stop, then turn right at the junction by the big white house, then keep on going until you see a bridge…”. (The reason these directions are often more confusing than the homeowner intends is that we all find it hard to remember that landmarks that are totally familiar to us can seem very foreign to someone who has never come across them. They are often subjective.)

In remote areas, a feature that can be easily identified can be like a gift after several hours of waning confidence. Perhaps a lake shaped unmistakeably like a bird appears, where you expected it, as you cross over the brow of a hill.

In the case of urban navigation the fear that food or shelter will completely abandon you if you make a serious mistake is less real, but the navigation challenges can be every bit as demanding. Unknown streets have a tendency to blur into each other, taunting and goading us to feel lost with their homogeneity. This may be the reason that unique buildings can give such a warm feeling in any city. They are the landmarks that give a town its shape and as soon as one appears from around a corner, the town itself arranges itself more neatly in our thoughts.

So it was the other night, when the Albert Hall beamed at me from between two tall dark rows of buildings. I knew where I was before I saw it, I know the area well, being so near the Royal Geographical Society, and yet its appearance still gave me that warm feeling of confirmed position.

The clouds had been moving from the east during my walk. I glanced up, watched a few cumuli amble over the rooftops and confirmed my suspicions that I was southeast of the Albert Hall. I was clearly less lost than the hundreds of souls who queued in desperate snakes to see Cliff Richard perform there that night.