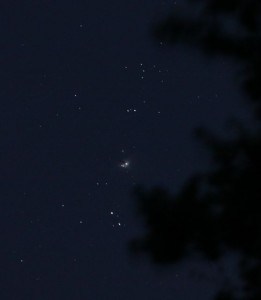 We are bearing down on stargazing-season. It is getting dark early enough in the evenings, staying dark long enough in the mornings and doesn’t yet freeze you for the privilege.

This morning I enjoyed a view of Orion, Sirius, Leo, which has just marched ahead of the dawn sun now, and a few other players. I took this photo of Orion’s Sword hanging down to the left (eastern) side of a large beech tree and dangling down towards the south, as it does. The ‘smudge’ in the middle is the Great Nebula in Orion, also known less romantically as ‘M42’. It is a ‘stellar nursery’ where new stars are born. Would a more appropriate term not be a ‘stellar maternity ward’?

On a different subject, my best wishes and good luck to Kevin Shannon who is attempting a zero-emissions circumnavigation of the globe. He asked me for my thoughts, and here they are (co-posted on his blog too):

I met Kevin at the Outdoors Show in Birmingham in March and remember our encounter well, which, considering that I met at least two thousand people in three days, must say something about Kevin and his unusual project. I am lucky in that my work allows me to cross paths with a wonderfully varied crowd. Some of the paths are on the ridges of windswept mountains and others run through the Birmingham NEC, but even with the variety that comes from walking through wildernesses and urban jungles, there was something about Kevin’s expedition that resonated, something that kept it in my mind.

Modern expeditions tend to strive for a ‘noteworthy audaciousness’: the fastest, the youngest, the first all-female team to reach… This is often driven by a need for sponsorship, but also, if we are honest it is because nobody likes to risk their life, or livelihood or even just their time and effort for something that may go entirely unnoticed. We all like to leave a mark of some sort. From the boldest adventurers to timid individuals, everyone lives in fear of their short time on this planet going completely unnoticed. Increasing numbers are choosing to battle this fear by throwing fear at it and there is vast range in the methods people are choosing. From racing to the North Pole to queuing at X-Factor auditions.

What I like about Kevin’s expedition is that its noteworthiness comes from stripping something away. In his case emissions have been stripped away, but I think this may prove to be part of a significant trend and I am not referring to the climate here. The expeditions of the future may strive for noteworthiness by embracing minimalism, not by adding bells and whistles. In time I think the minimalism may come to include the scale of the expedition itself, but it is not quite time for that yet. This is something that a man who has set out to circumnavigate the globe will be most aware of.