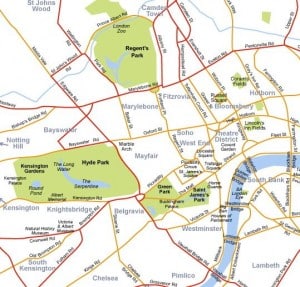 The past few days have seen me bouncing between meetings in London – pinging between Kensington, White City and Theatreland. Throw in a Tube strike on the Tuesday and the stage was set for some urban natural navigation.

The sun, trees, churches, clouds and satellite dishes all played their parts, but there are so many lesser known roles in the epic production that is ‘City Navigating’.

As if to prove this I received a message a couple of days ago from someone who had read the book and got in touch with some intriguing urban ideas. Clem McEwen drew my attention to two methods which sounded familiar, but which are certainly not well known to me, or used by me… yet!

1) Street numbering. Streets are normally numbered in ascending order away from the centre of a town, with the numbers 1 and 2 being closest to the centre, normally on opposing sides of the street.

2) The crossbars on telephone poles are always on the side nearest Charing Cross in London.

Both of these seem strangely familiar and yet, like so much of the navigation experience, are not things that I have been consciously aware of recently. I do have vague recollections of my mother mentioning the Charing Cross idea when I was a child, but then again she was much more likely to have been giving me some variant of her standard navigational advice: ‘Drink lots of water and wear a vest if it’s white outside!’

The final act of my Grand London Foray was a three mile traverse that clipped a corner of Hyde Park; it went without a hitch, but then Hyde Park is an obscenely large and easily recognised landmark.

I have not yet had a chance to research the methods sent over by Clem in any detail, practically or theoretically, but if anyone has any light to shed on them or experience in using them, then please drop me a line.