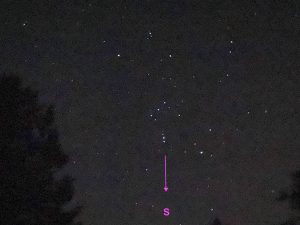 On my night walk earlier, the stars were on great form. I like to use lots of different techniques for fun and practice, but Orion was the boldest this morning. When Orion’s sword points vertically down to the ground, we are looking South.

Orion’s Sword can be seen in the image above as the short vertical line of ‘stars’ under Orion’s Belt.

The Sword does indeed point to a spot on the horizon that is close to due south when the Sword is near vertical (as in this image), but it is a less dependable guide when it is well off-vertical, ie. when it is lower in the sky.

Technical bit for natural navigation zealots only: The reason that the Sword is more accurate when vertical is that it makes a line in the sky that is parallel to the line towards the south celestial pole. When vertical this line intersects with the horizon at a point very close to due south, but at times when the sword is closer to the horizon, ie. closer to east or west, then the point of intersection will also mover closer to east or west respectively. The extreme would be the moment when the sword rises in the east or sets in the west.

Bonus trivia: The Orion Nebula, a region of massive star formation, can be seen as the bright orange ball that forms the middle of the three ‘stars’ of the sword. NB. It is not the huge bright orange star to the top left, that is Orion’s shoulder and is called Betelgeuse or ‘Beetlejuice’, from the Arabic words for ‘giant’s shoulder’.