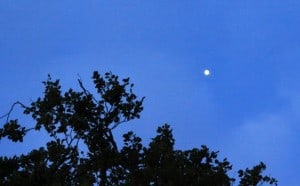 I returned from a family trip to Brittany yesterday and what better welcome back than to come downstairs this morning to find Jupiter beaming at me through a skylight. It is a firm fixture in the early morning sky now and consequently is being confused by many for Venus. If a bright white object is visible when it is too light to see many stars then you are likely looking at Jupiter or Venus, and if the sun is more than fifty degrees away (five extended fist-widths) then that narrows it to Jupiter. This is an exercise you only need to do irregularly since it will appear in the same part of the sky at the same time for many days.

Since Venus is relatively close to the sun and is only visible as a bright object when the sun is below the horizon, it follows that Venus is normally seen in the east or west – hence its reputation as a morning or evening ‘star’.  Jupiter’s orbit around the sun is much larger than our own and so it follows no such rules and can be found close or far from the sun. This morning, when I saw it, it was a very bright object due south of me and this is something that can never be claimed of Venus from these latitudes. Whenever Venus is due south of you then the sun will be well above the horizon.