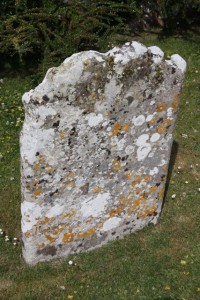 Churches are well worth a minute of navigational inquiry. The church itself is likely to show a preference for an east-west alignment, with the altar at the eastern end. But the fact that they are often old buildings that have been left exposed to the elements for long periods, without incessant redecorating or even cleaning, yields other interesting clues in the form of lichens, algae and mosses.

Gravestones tend also to be aligned east-west also, so that the dead are ready when ‘the trumpet shall sound and the dead shall be raised’. Any exposed stone that faces east or west will receive a mixture of sunlight and shade. Consequently they typically display a mixture of lichen types, as in the gravestone in this photo, in the graveyard of St Giles church in the quiet West Sussex village of Graffham.

On this gravestone there are a preponderance of gold and also grey lichens, with a smattering of darker lichens too. There was a very similar pattern on the other, western side, which came into the sunlight in the afternoon. The golden lichens are happy on stone that dries and are a reliable indicator that a face is receiving at least some sunlight. In other words you can find them on the south, east and west sides of masonry, but they are very rare on the northern side. In the unlikely event that this grave was aligned north-south then the southern side would be dominated by the golden lichens and the northern side would have a few grey and dark lichens and the telltale greens of mosses and algae.

The green wall in the photo below is a classic north-facing wall in the same churchyard, with no signs of gold, only a thin carpet of green moss.