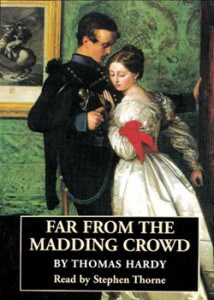 My thanks to Stuart Goring for sending over these great Thomas Hardy celestial quotes. Those who know this blog or my book will be aware that I love it when nature and the arts come together. The two following excerpts are taken from ‘Far From the Madding Crowd.’

“He stood and carefully examined the sky, to ascertain the time of night from the altitudes of the stars. The Dog-star and Alderbaran, pointing to the restless Pleiades, were halfway up the Southern sky ,and between them hung Orion, which gorgeous constellation never burnt more vividly than now, as it soared forth above the rim of the landscape. Castor and Pollux with their quiet shine were almost on the meridian: the barren gloomy square of Pegasus was creeping round to the north-west; far away through the plantation Vega sparkled like a lamp suspended amid the leafless trees, and Cassiopeia’s chair stood daintily poised on the uppermost boughs. ‘One o’clock,’ said Gabriel.”

“The sky was clear – remarkably clear – and the twinkling of all the stars seemed to be but throbs of one body, timed by a common pulse. The North Star was directly in the wind’s eye, and since evening the Bear had swung round it outwardly to the east, till he was now at a right angle with the meridian. A difference of colour in the stars – oftener read of than seen in England – was really perceptible here. The sovereign brilliancy of Sirius pierced the eye with steely glitter, the star called Capella was yellow, Alderbaran and Betelgeux shone with a fiery red.

To persons standing alone on a hill during a clear midnight such as this, the roll of the world eastward is almost a palpable movement. The sensation may be caused by the panoramic glide of the stars past earthly objects, which is perceptible in a few minutes of stillness, or by the better outlook upon space that a hill affords, or by the wind, or by the solitude; but whatever be its origin, the impression of riding along is vivid and abiding. The poetry of motion is a phrase much in use, and to enjoy the epic form of that gratification it is necessary to stand on a hill at a small hour of the night, and, having first expanded with a sense of difference from the mass of civilized mankind, who are dreamwrapt and disregardful of all such proceedings at this time, long and quietly watch your stately progress through the stars. After such a nocturnal reconnoiter it is hard to get back to earth, and to believe that the consciousness of such majestic speeding is derived from a tiny human frame.”

I will try not to spoil the moment by pointing out that if Castor and Pollux were ‘almost on the meridian’ then it would be hard to see the square of Pegasus in the way that Hardy describes. I will try but fail. Rare is the fiction writer who has ever attempted to portray the night sky without betraying their lack of fundamental understanding. Hardy’s efforts are much better than most, as you might expect from a literary giant. So few writers appreciate that the stars, if described in detail, must be fixed in time, both nightly and annual, as well as in direction. There is nothing casual or random in the appearance of the night sky at all. Fortunately the errors are rarely obvious enough to spoil a good story!