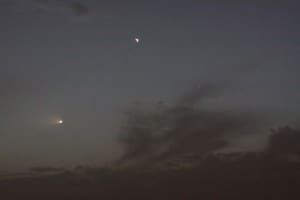 I quickly reached for my camera when I saw these objects in the sky. The picture was taken without a tripod and so they are a little blurred, but it is still just possible to make out the lights. A few seconds later the sky looked completely different and this could lead to suspicions that something unusual was going on, perhaps even stir suspicions of UFOs. The true explanation is very straightforward.

The bright light to the left of the picture is an aircraft turning towards the camera with its landing lights on. The bright light near the top of the picture is Venus. There is a fainter light, barely perceptible amongst the edges of the top part of the cloud and this is Mercury. A few seconds later the aircraft had turned fully and effectively disappeared from view and Mercury had disappeared behind a cloud making the sky appear very different. Move along now, Mulder and Scully, nothing to see here!